Finding specific crafting materials, such as wool thread, is not always easy in V Rising due to the sheer number of components in the game. V Rising is a top-down MMORPG where players must use a complex crafting system to build their base by crafting items and equipment that enhance their character. In the game, players take on the role of a vampire who wakes up after a centuries-old sleep and must regain his strength while surviving in the harsh world of V Rising.

Crafting is a huge component of the game, so players shouldn’t be surprised to find that many blueprints and recipes can only be obtained by defeating bosses in V Rising. Blueprints can be used to build new structures in their base, which in turn allow players to use new recipes and craft new, more powerful equipment. Many bosses can spawn frequently in multiple locations in V Rising, so players are encouraged to track them through the Altar of Blood.

How to Farm and Craft Wool Thread in V Rising 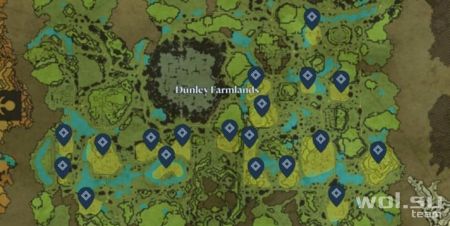 Wool Thread is an upgraded version of Coarse Thread and can be found mostly in the Danlí Farmland region as shown on the map. While exploring this area, players can raid settlements and villages to loot as many chests, crates, buildings, and enemies as possible. Players can plan their route around mapped locations in V Rising, but will also be able to find a lot of Woolen Thread by organically exploring the area.

Crafting Woolen Thread can be done later in the game, as players will have to defeat the level 52 boss, Meredith the Bright Archer, to do so. Meredith, who drops the Wool Thread Recipe, can also be found in this region in the Haunted Iron Mine south of Danley Farm. Should players have difficulty finding her, they can track her and the loot she drops using a special building in their base called the Blood Altar in V Rising.