In the first main mission “Reach for the Stars” in Horizon: Forbidden West, there will be a moment when Aloy will be left alone and will need to climb a tall tower to shoot two cable connectors that will drop a shuttle on unsuspecting robot enemies. In this guide, we’ll show you how to climb the starting tower and how to get to the cable so that Aloy can destroy it with her bow and arrows.

Where to find shuttle cable connectors

After releasing the shuttle clamps, an elevator will descend in front of Ala and players need to head towards it and then use their Pullcaster item on the wreckage to its right to lower it even lower. Jump onto the elevator by going through the small hole on its roof. Climb up to get to the platform and then jump over the small opening to go up the stairs. At this point, Aloy will mention that she needs to get closer to the shuttle to disconnect the cables.

Shoot the first cable connector on the shuttle

Continue up the path until you reach the first cable connector. Stand nearby and players will see a glowing yellow spot. Take out your bow and shoot an arrow at it to destroy it. As for the second cable connector, Horizon: Forbidden West players will need to get to a higher point on the starting tower. 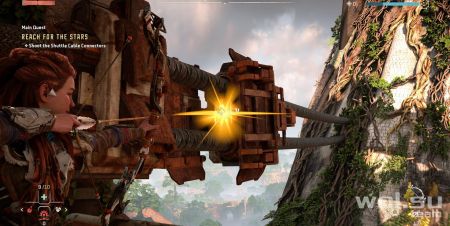 How to get to the second cable connector

As soon as the players destroy the first connector, immediately turn around to see a short metal ladder and then jump across the gap to one of the handrails on the tall pillar. Jumping with X and then pressing X again will pull Aloy up to the pillar. 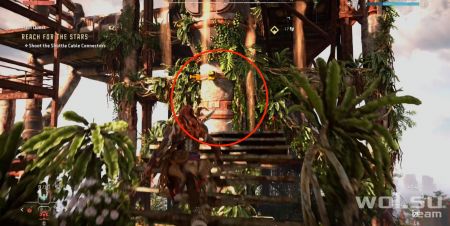 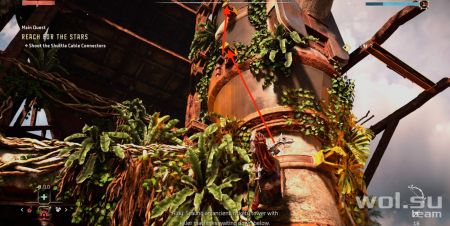 Move up and around to grab the rest of the railings and continue up the column. Aloy will have to make her way to the left along the yellow rungs, and then go down to a new platform. 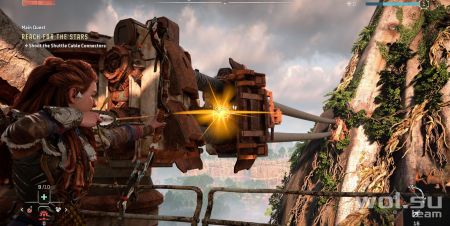 Jump over some metal structures and climb the short ladder to reach the second cable connector and finally drop the shuttle on the snake-like robot enemies.

Horizon: Forbidden West players should brace themselves for one of the first “boss” battles in an open world game. Since it’s technically still part of the tutorial, players shouldn’t have too much trouble defeating him.