In Raft, Varuna Point is one of the new locations available in the new “Last Chapter” update. Varuna Point is the sixth location in the main story and the first new location in the update that players will visit. Varuna Point consists of two underwater buildings that are still under construction, although they have not been worked on for a long time, so they stand as half-finished structures, occupied by all sorts of marine life, including the Rhinoceros Shark boss. In addition to the Rhinoceros Shark, while exploring inside the building, players will encounter jellyfish, anglerfish, and lurkers.

Varuna Point is a visited island, but most of it is under water. Like an iceberg, most of the structure is underwater. To avoid resurfacing, players need to find oxygen bubbles while swimming underwater. While in Varuna Point, players need to solve puzzles, overcome enemies, traps, and take part in a boss fight before completing the story and moving on to the next island, Temperance.

How to find Varuna Point in Raft 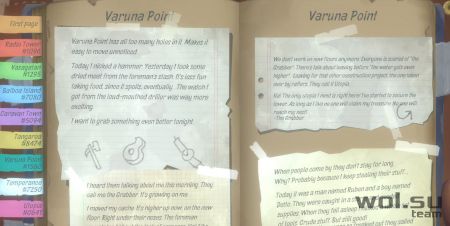 When players arrive at Varuna Point by raft, they need to explore the underwater searchlights between the two buildings. This will start a quest for the location, which involves finding four spotlight pieces to fix the broken spotlight. In addition to the Searchlight Parts, players will find a Mother Cargo Key, a Crane Key, a few more blueprints, and a code for the next location: Temperance. Blueprints that players can find at Varuna Point are for the Advanced Battery, Advanced Headlamp, Wind Turbine, and Electric Grill.

While exploring Varuna Point, before reaching the end where the blueprints are located, players will have to fight the first boss in Raft: a terrifying, massive Shark/Rhino hybrid. The weapon cannot hurt the Rhino Shark or any other items players might have, so instead use the environment to hurt the Rhino Shark. First, the players must get the Shark to drive them onto the support posts. Players can then plant an explosive barrel, lure the Shark into crashing into the barrel, and the next phase of the Rhinoceros Shark boss fight will unlock. Like any classic game, it takes three hits to defeat the boss. Players will also receive the Explosive Power! achievement when the Rhinoceros Shark is dead.