Star Wars: Knights of the Old Republic II: The Sith Lords is filled with memorable moments as players gradually reconnect with the Force and face the incredibly dangerous Sith Lords. Throughout the journey, players will have to make an important choice between the Light and the Dark side and determine the future of their character, the Jedi Exile.

Depending on certain, non-obvious choices made on Nar Shadaa, players may experience some of the toughest combat encounters in the game. By taking Atton Rand’s companion from Knights of the Old Republic 2 to a specific area on the planet, players can face two assassins, the sisters Sir’aa and Tir’aa, and only them. This will happen after the players go to meet Goto.

Due to the power of the Sun Twins and the fact that Atton acts alone, this combat encounter in Knights of the Old Republic is quite difficult. Atton is a popular character with ranged weapons, and some can upgrade him with a lightsaber over time, but neither option is effective here. Luckily, while the Twin Suns are tricky to fight, they can be easily taken down with the right approach.

Players will either want to prepare Atton for this fight before heading out to face Goto as the Jedi Exile, or they can pause and do it at the beginning of the fight. Instead of pistols or a lightsaber, players must equip Atton with a vibrosword. They deal more damage to Twin Sun shields. Next, players should make sure they have a Mandalorian melee shield with multiple charges, as well as some healing items. 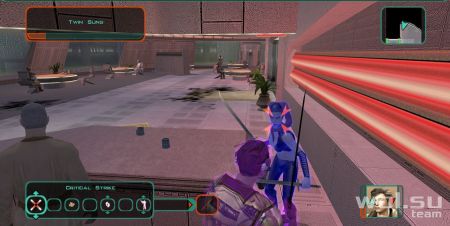 That’s it, but then one key tactic (see above) makes it a cakewalk. Players will want to turn around and run behind the bar – the Twi’lek sisters will not follow the player there. They can then step towards the bar, but the sisters can only advance that far towards the bar. What’s more, this arrangement means that only one sister can attack, allowing players to fight them one-on-one rather than one-on-two.

When using a melee shield, when it wears out, players will take slow damage, and healing can keep them alive, and then it will only be necessary to wait and issue commands to defeat the Twin Suns one by one.