Europa Universalis IV uses a sophisticated system to model markets and shipping around the world. Even if your country does not produce expensive goods, you can still earn a lot of money if these goods pass through your territory. Some nations, such as Venice, Portugal, Oman and others, achieve fabulous wealth in this way.

Most players can be quite successful and content taking over the world’s trading centers and letting the money flow into their treasury, but a player who knows how the trading system works can reap even more benefits.

What are Trade Nodes in Europa Universalis IV 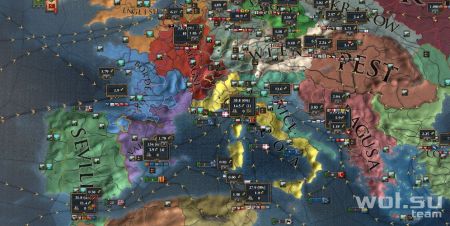 In each region of the world there are several Trade Nodes, which are separate markets for goods. The location of each trade node and the connections between them are fixed and cannot be changed during the course of the game by any means. However, Nodes can be made more or less valuable by manipulating the flow of expensive goods to or from them.

The amount of control a nation has over a trade node is represented by its trade power. Trade power comes from owning land in a Trade Hub and sending light ships to protect trade routes. Merchants sent to the trade node also contribute to trade power, but their numbers are negligible. Think of Trade Power as your country’s share of the Trade Node: the more Trade Power you have compared to other nations, the more money you can earn.

Tip: Provinces marked as Trade Centers provide a disproportionate amount of Trade Power compared to others. Holding the hub’s trading center is vital to controlling that market.

The trading value of a node is the amount of money in the node at a given time. If you have a trader in a trade node, you can either take your share of the money by sending it straight to your treasury, or transfer the trade power to the next node, potentially giving you a larger share of the more valuable market.

Where does the trade value come from? 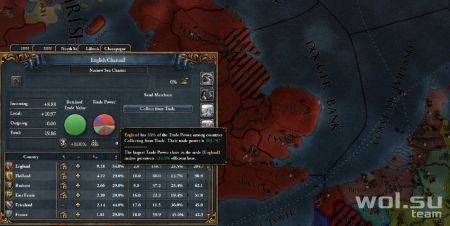 Money flows into the trade network wherever goods are produced, that is, from every controlled province in the game. Each node starts with a trade cost equal to the total price of all goods produced in its provinces. Prices are mostly static, but world events can cause permanent changes in the cost of goods. If the province starts producing more goods, the amount of money flowing into the trading network also increases.

Note: The owner of the province also receives the value of the goods produced there as income, so you have nothing to lose when the money goes into the trade network. Moreover, you have the opportunity to earn double income by earning both on the production of goods and on their trade!

Any trade value not collected by the trader is passed on to the next trade node. This means that each trade node in the game receives money from its provinces and from the nodes that feed it. If a Trade Node has multiple potential destinations, the money is divided between them at the direction of all Traders present who have an order to transfer Trade Power. The merchant whose country has a higher Trade Power will send a larger share to their chosen destination.

The money continues to flow through the trading network until the merchant takes it. They also gain value the farther they travel, especially if one or more of your merchants transfer them along the way. Therefore, the best strategy is to send as many goods as possible to the node where you have most of the trading power and collect them there.

All the money that enters the trading network ends up in Genoa, Venice or the English Channel if it is not collected in advance. Countries with Trade Power in these areas must collect their shares and cannot transfer them further. Since all world trade is directed to these three points, control and dominance over them is always very beneficial.