There are many new items available in Raft to research and craft, including the Titanium Sword, which deals more damage than the melee weapons previously available in Raft. After obtaining the blueprint at the end of the final chapter, players will be able to research and craft the Titanium Sword. It only requires a few resources to craft, but some of them can be difficult to obtain.

Along with the new sword, the Titanium Tools blueprint unlocks a new type of arrow, hook, and axe. All Titan tools require titanium ingots, which are one of the hardest resources to collect. However, there are several ways to get this material. Along with three titanium ingots, a titanium sword also requires three scraps, two ropes, and two bolts to craft.

Get more titanium ingots and craft a titanium sword 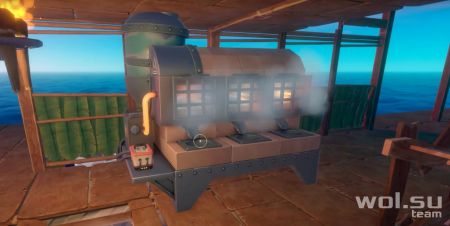 To craft two bolts, players need to go underwater and use the grappling hook to collect two metal ores. Metal ore can be placed in a smelter or electric smelter to get metal ingots, and then players can use this resource to craft bolts. Scraps can also be found underwater and picked up with a grappling hook, but players can also find them in barrels floating in the ocean. To create ropes, palm leaves are needed, which can be found in the water. In addition, palm leaves can be collected by cutting down palm trees with an axe.

In order to collect titanium ore effectively, players should travel to Tangaroa Island and look for briefcases that randomly spawn in buildings. In addition, when exploring any large island, you can use a metal detector to find titanium ore more easily. It only takes three titanium ores to craft a sword, so it doesn’t take long to collect them. Titanium ore can be placed in a smelter or electric smelter to turn it into titanium ingots.

When all the materials are collected, players can craft a titanium sword and start using it to fight sharks and other hostile creatures. Although the blueprint can only be found in Raft after completing Temperance and Utopia, the Titanium Sword is worth crafting to continue the adventure after completing the story. The new Titanium Sword is better than other melee weapons in Raft and deals 20 damage per hit, so it’s worth finding a blueprint and crafting it.