The story mode in Disney Mirrorverse currently consists of seven chapters with challenging combat encounters, and some combinations of characters work better as a team than others. At first, players will have to use Guardians, which they receive for free, but over time, a large enough squad will be accumulated that various options will become available. The encounters in the story mode are getting more and more difficult, so choosing the right team will help players avoid wasting energy and losing.

Story mode encounters provide valuable rewards and make up the majority of the game. Before entering each encounter, there is a tab on the side that lists the boss, his abilities, and the minions that will spawn throughout the encounter. Not every story mode will feature the same playable characters from the Disney Mirrorverse, but certain combinations of commands work better. At the beginning of the game, it’s not that important to have the right team, but in later chapters it becomes difficult to win if players don’t use the best Guardians possible.

There are four classes of Guardians: melee, ranged, tank, and support. Each character class has Guardians that share common traits. For example, tank characters all carry shields and have increased defense stats compared to other classes. However, each Guardian in the Disney Mirrorverse has unique special attacks, talents, and secondary abilities, such as placing negative buffs on opponents or positive buffs on teammates. Some characters have better special attacks and talents, but in general players can stick to certain classes rather than need specific characters they may not have unlocked yet.

The best Guardians for storytelling in the Disney Mirrorverse 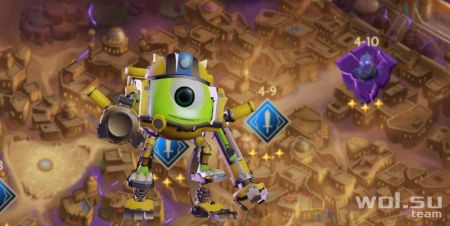 Players can also use a team consisting of tanks, melee heroes, and shooters. However, without support, it is more difficult to earn three stars for each encounter, keeping each Guardian alive until the end. Regardless of what other Guardians are on the team, if a melee character is used, then it is his players who must take control. Support and ranged characters like Zurg in the Disney Mirrorverse usually stay far enough back to not take heavy damage, and tanks have increased defense. Melee characters are usually the first to be taken out of action. If a melee character is AI controlled, they won’t dodge much and the Guardian’s health will deplete quickly.

The story mode consists of seven chapters, and each of them is more difficult. The smaller the gap between the recommended power level and the player’s power level, the easier it is to drop out of the game and lose star rating rewards or be defeated. If the Guardian team’s power level is below or just above the recommended one, a support character should always be used to provide the team with healing, and tanks will make it easier to survive until the end. The best team lineups for Story Mode in Disney Mirrorverse are usually Support, Tank, and Ranged Guardian, or Melee, Support, and Ranged.