In Genshin Impact, Sweet Dreams by the Sea is a browser-based event in which the Traveler and Paimon reminisce about their adventures in the Golden Apple Archipelago during their Summer Sea Trip. Players can take part in this event to earn various in-game rewards such as Source Stones to grant wishes and Morata to upgrade characters. The relaunch banners for Kazuya and Klee are currently live. Accordingly, Genshin Impact free-to-play fans will need all the free Source Stones they can get to get these two great additions to their roster.

How to start the Sweet Dreams by the Sea event

To start the Sweet Dreams by the Sea browser event in Genshin Impact, players must log into their Hoyoverse account and select an account connected to their server. As with past web events, there are no prerequisites to participate, such as adventure rank requirements or completion of a story quest. After passing the title screen, participants will have a short dialogue script between Paimon and the Traveler. Paimon says she would like to remember her recent dreams, referring to her experience in the Golden Apple Archipelago. Therefore, the Traveler will have to help his little companion remember what she did or saw during the Summer sea voyage.

The web event is divided into several islands or “dream images” that depict the islands of the Golden Apple archipelago. After choosing a dream image, Paimon will ask the traveler about what he experienced. To advance in the event and receive in-game rewards, participants will need to answer all questions correctly. 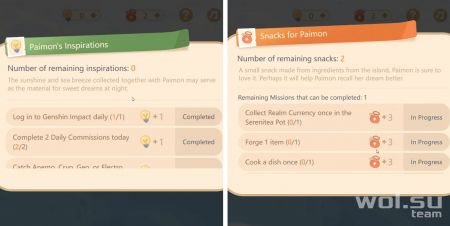 For example, for the first island, there are three correct answers:

At the end of the dialogue, players will receive a nice screenshot with additional Primogems and Mora. Below is a more detailed mechanics of how this web event works:

Question #1: This seems to be the first island we hit when we went to the archipelago, but Paimon can’t remember exactly…

Second question: What was the name of the transport that took us to the island?

Second question: What was the name of the transport that took us to the island?

The first question: A forest boar of a strange color … I wonder what kind of boar it is?

Second question: Every time the Traveler encounters this flying vicious creature, his head starts to hurt. I wonder why so?

Third question: The creature had approximately such outlines. What could it be?

First question: The Traveler is very good at destroying them, Paimon remembers that well. What could it be?

The third question: His silhouette is something like this … I wonder what kind of creature this is?

First question: It also has great cultural significance for Nirvana nights. What was it?

Second question: It liked to ask strange questions. What or who could it be?

The third question: His silhouette is something like this … I wonder what kind of creature this is?

The first question: She is somehow connected with one of our good friends … What was it?

Second question: Something to do with the pattern of the bowl in the sky… Oh, what was that?

Second question: Something to do with the pattern of the bowl in the sky… Oh, what was that?