One of the new features in Diablo Immortal is the concept of raid units or squad camps. Raid units are not new, but the concept has been adapted for the multiplayer game Diablo Immortal. While players can join large clans or factions, a squad is the best way to team up with other players in the early game.

Squad camps become available to players only after completing the tutorial and meeting with Deckard Kane. Or, more simply, when the player will be able to see other players, and not just NPCs and enemies. Squad camps function like guilds – small groups of up to eight people who can fight and play together.

Like its predecessor Diablo 3, Diablo Immortal encourages users to play together. Once players discover the MMO aspect of the game, there are many options for team play. Squad camps are the smallest group of players, and if that suits you, there are also clans for bigger collaborations. One of the benefits of playing cooperatively is that you have a better chance of winning boss raids like the Helicarium raid in Diablo Immortal. But before joining a large clan, find or create a squad to get comfortable in the network game. 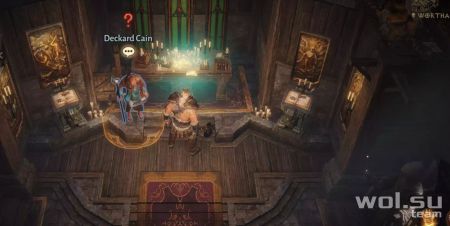 To find units, click on settings in the upper right corner of the screen; this is the same settings menu where the player can access the shop, skills, and current quests. From here, the player should see the Squad at the bottom of the screen. When the player presses the squad button, they are taken to a screen where they can either create a squad or join an existing squad. It looks the same in both mobile and PC versions of Diablo Immortal. Since the maximum number of members in a squad is eight, they can quickly fill up. Click on the “Apply” button to join the squad.

To create a squad, click on the button below in the lower left corner. Here the player enters a name, selects a target, the time of day the players should gather together, and a short description. Once all the required information is filled in, a new squad can be created.

Once a player joins a squad and the squad collectively kills 10,000 monsters, they will be able to enter the squad’s camp. It is very similar to the vagrant camp from Diablo 2, where players start at a campfire with wagons around. During the game, squad members spawn together at the squad camp and can sit around the campfire together.

Benefits of joining a squad in Diablo Immortal

For players accustomed to single-player, joining an online party can be intimidating. Especially if there are only eight people in it, who are expected and encouraged to play together in raids on bosses and team growth. However, there are several benefits to joining a squad.

One major downside to the squad stash system is that if a player brings items into a squad stash and then leaves the squad, those items stay with the squad member.