The final boss in the Diablo Immortal campaign is Skarn, the Lord of Curse, and he can be very difficult to defeat depending on the player’s character class and skills used. Skarn has a variety of attacks, as well as several phases of the battle that require the use of various techniques. Some classes are easier to use against Scarn, but any character can defeat Hexlord if players can figure out how to dodge his attacks, when to strike, and what skills to use.

Where to find the demon Skarn

To get to Skarn, players need to complete the entire campaign. The Realm of Damnation can only be entered once players reach level 55, and there are several missions in this area to complete before the battle with Skarn. It is recommended that before the fight with Scarn, players try to reach the maximum level of 60 to make the fight easier. Also, doing a few Elder Rifts or Challenge Rifts in Diablo Immortal before the final boss fight can help you better prepare for the Lord of Damnation fight.

How to defeat Scarn

Obviously, the difficulty of defeating Scarn decreases the larger the party, but each character class can defeat the final boss alone. Skills that target specific enemies or deal AoE damage are usually better for dealing with Skarn. However, this does not apply to all character classes. Optimal equipment may also differ depending on whether players will be defeating Skarn in a party or solo. Solo players are better off having at least one skill that protects or heals them. The best way to ensure vitcory is to figure out the pattern of Skarn’s attacks and develop tactics for each phase of the fight.

Phases and attacks of Skarn 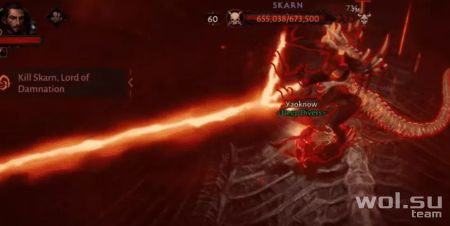 After you enter the Skarn Arena for the first time, an introductory scene will begin before the fight begins. Once the scene is over, Skarn will start attacking. There are a few basic attacks to watch out for in the first phase of the fight. Skarn will release several fireballs, but they are easy to dodge by getting out of the way of the attack. Fireballs move slowly and only in a straight line, so skills like the wizard teleport in Diablo Immortal are not needed at this stage. When dodging fireballs, players will most likely see the Skarn charging up. After a few seconds, the Scarn will fire an energy beam, but players should take the opportunity to attack while it’s still charging.

It’s easier to avoid the energy beam if you stay close to the boss. The skarn will rotate around the arena while firing a beam, so the faster players can get around the circular area, the easier it will be for them to avoid being hit. The scarn will scroll almost to the end of the arena, after which the beam will disappear. The fireballs and energy beam will likely repeat several times before Skarn adds a third move to the first phase. Regardless of how early the fight started, Skarn also has the ability to summon minions.

Skarn’s minions are worm-like creatures that pop out of the ground and shoot fireballs. Minions don’t do much damage, but when the arena is full of them and Skarn keeps firing energy beams, they can make the fight even more difficult, especially if the Paragon levels in Diablo Immortal aren’t unlocked yet. It is recommended to defeat all minions before attacking Skarn again. Once Scarn’s first health bar is depleted, the boss will disappear and shadows will fill the arena. To bring back Scarn, you need to defeat several shadow heroes of different classes. This part of the fight should be simple and fairly easy if the players keep moving.

The fight against Scarn will transition from the first phase to the arena of shadows several times depending on how quickly players can drain his life. Once Scarn is below half health, shadows in Diablo Immortal will stop spawning and the boss will split into four smaller demons. A timer will appear at the top of the screen, indicating that players have eight seconds to find the real Skarn. Luckily, the real Skarn is marked by a very visible red circle underfoot. To complete this phase of the fight, the health of the lesser Skarn can be depleted. However, if players fail to find the real Skarn enough times, the boss will still reappear.

When Skarn returns to full height, he will use the same attacks as in the first phase. There will be another four-skarn split before the fight ends, so players should be ready to attack the correct skarn again. Dodge is key to defeating this Diablo Immortal boss, but players also need to be able to deal a significant amount of damage as Skarn starts the fight with over 600,000 health. As a rule, it is best to use skills that deal damage at close range or can protect the character from some of the attacks of Skarn and shadows. After defeating Scarn, the final scene will appear and the campaign will be completed. 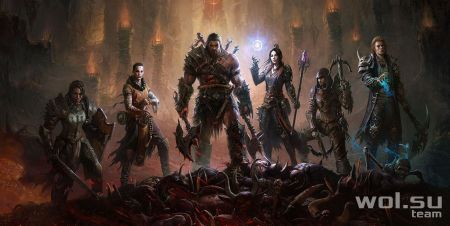 Although each character has a general optimal formation, defeating Skarn may require changing some skills for each class. This is somewhat dependent on having legendary gear, which has attributes specific to certain skills. For example, the best wizard build in Diablo Immortal might not include Ray of Frost, but it could be modded with Legendary gear to use Blizzard instead, which pairs well with Frost Armor to get close to Skarn and deal damage. without the risk of being injured. Each class has specific skills that are best used against Scarn, but players may need to change their build depending on the gear they have equipped and what attributes are actively modifying their skills.