In Genshin Impact, the Ruin Crusher is part of the Ruin Guard enemy group that was added along with Inazuma in the 2.0 update. Ruin Guardians drop a new type of material that players need to upgrade weapons: Chaos Gear (green), Chaos Axis (blue), and Eye of Chaos (purple). Players will have to mine these enemies to upgrade many of the weapons released in Inazuma, so they need to know how to deal with them.

The Ruin Crusher is the most notorious enemy among the Ruin Guardians due to the annoyance that can come from encountering it in combat. While Ruin Crushers don’t typically have high health, they make up for it with their ability to deal a lot of damage to the player. It is a common enemy in recent versions of the Spiral Abyss, and is a common sight in Inazuma.

How to defeat the Ruin Crusher 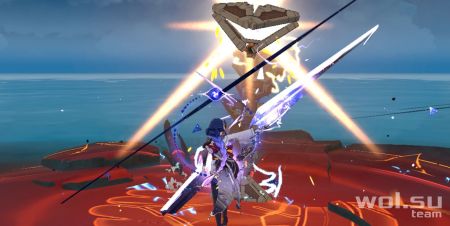 The Ruin Crusher has several different attacks that it uses when fighting the player. The first attack is the most basic: Ruin Crusher will swing its body in a circle around it, dealing damage. This attack can be dodged, or the player can simply step back out of the area of ​​effect. The Ruin Crusher can also fire small energy balls towards the player that deal minor damage.

The Ruin Crusher can also create an energy field on the ground below the player. If a player stands in this field, his character on the field will take a lot of damage over time, so it is better for the player to remove his character from the field as soon as possible. Shield characters in Genshin Impact are also highly recommended for this. Finally, the Ruin Crusher will deploy on the ground and create a vacuum field, pulling the player in and charging its core. After a while, the core will overload and explode, damaging the player. Although it is possible to break out of this vacuum field, this attack is the only one in which the core of the Ruin Breaker is open, which means that the player can attack it and stun the enemy.

The most notable feature of the Ruin Breaker is its movement animation. To move from place to place, the Ruin Crusher uses a long animation in which he bites into the ground and returns to his destination (this was probably the inspiration for fighting the new Ruin Serpent boss). Players should keep in mind that the Ruin Crusher is completely immune to damage during this animation, so the best way to deal with this enemy for Genshin Impact players is to be patient not to use them during the enemy’s invulnerability period.