In TMNT: Shredder’s Revenge, Rocksteady is one of two bosses that the half-blood heroes and their allies must defeat.

Along with Bebop, Rocksteady is the villain of episode 7 “Reptiles Running on the Rooftops!”. In addition to taking out Bebop and Rocksteady, the Turtles and other playable characters can complete a number of side missions throughout the episode. In particular, in the episode “Reptiles Run on the Roofs!” There are three side missions for the Teenage Mutant Ninja Turtles. The first is to complete the level without falling into the pit. The second task is to drop three enemies into the pits. The final task of the episode is to defeat two enemies using traps. Traps in the episode “Reptiles Run on the Rooftops!” It’s not the pits that count, but the TV antennas, traffic cones, and hanging boxes that can be seen throughout episode 7.

Episode 7 also has four hidden secrets to find. Before the Teenage Mutant Ninja Turtles get to the Rocksteady and Bebop boss in TMNT: Shredder’s Revenge, a secret diary, a box of sushi, a VHS tape, and a disgusting bug can be found. The secret diary can be found shortly after the start of Episode 7 by breaking the red toolbox. The TMNTs are then able to find the sushi box by breaking the construction elevator’s control panel. The VHS tape can then be found in the red toolbox in the building under construction. Lastly, the Abominable Beetle can be found in another red toolbox next to the large roll-out tool cabinet.

How to beat Rocksteady in TMNT: Shredder’s Revenge 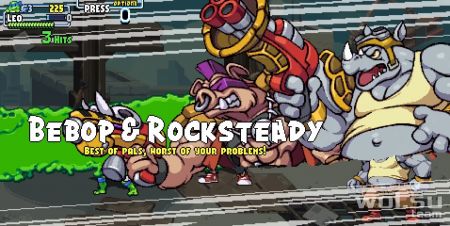 Rocksteady has four different attacks that he will use against the Teenage Mutant Ninja Turtles and their allies. Like many other characters in the game, Rocksteady wields a simple kick. However, the anthropomorphic rhinoceros can also throw grenades, fire ranged weapons, and attack turtles. Bebop also has moves similar to Rocksteady in the TMNT: Shredder’s Revenge boss fight, so players will have to be on the lookout for twice as many hits.

To defeat Rocksteady and Bebop, avoid the simultaneous charge they use to attack each other. As a result, they will collide with each other and be stunned for a short time, or at least fall down. Rocksteady’s kick attack can be parried without causing the TMNT to flinch, but his ranged and explosive attacks must be avoided at all costs.