As you progress through the story of MADiSON, Luka will enter a room with tablets from 1951, 1987, and 2022, which can be used to travel back in time between eras to solve the colored candle puzzle. This puzzle has four candles to place at the end of the maze according to their color. Also, each candlestick has a specific picture to place it under, and will only appear in 1951 or 1987.

Before placing the candles, players need to find all four by searching different eras. The yellow candle is near the entrance to the time travel room on the wreckage next to the fallen 2022 sign in MADiSON. Inside the time travel room, a blue candle can be taken from the bench under the 1951 sign. The red candle is in the church in the 1987 version. Upon entering the church, Luke can go straight ahead and up the stairs leading to the bells. The red candle is on the ground next to the bells.

The green candle can be collected in the 1951 church, but the other three candles must first be found and placed in the labyrinths. In the last location of the candles in the game, Luka will have to listen to the woman in the confessional. After the confession is over, a green candle will appear between the pews, but the ghost of the woman’s husband, Hans Goring, will also appear. From now on, he will attack Luka in a circle when he is in 1951, and the players will only have a minute or two before the attack begins. Hans appears and disappears several times before knocking out Luca in MADiSON. If players are knocked out, they will start the game outside of the time travel room. The green candle can be collected after everything else is done to avoid the ghost for as long as possible.

Where to put colored candles in MADiSON 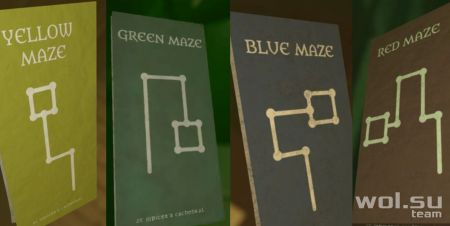 The 1951 and 1987 churches have four colored labyrinths with drawings at the end. There is only one correct place to place a candle, although they all have two possible labyrinths. The only way to determine which one is correct is to go to the end of the maze and see if there is a painting there. To determine the correct painting, Luca must photograph the paintings that are in the hall leading to the bell tower in 1951 and 1987.

The colors for each painting are the same, but the correct maze for solving this puzzle in MADiSON will differ between playthroughs. The yellow candle should be placed under the picture with the old man, the red candle under the crucifix, and the blue one under the picture of Mary. The candles will light up when they are in the right place. A diagram of each labyrinth can be seen by examining the reverse side of pamphlets scattered around the church. There are two candles each year, so after planting the first three, players should know where the green candle is without having to run around and risk being knocked out by Hans.

Once the yellow, red, and blue candles are in place, Luka will be able to travel to 1951 and listen to the woman’s confession. Then you can collect a green candle and quickly place it under the picture of angels. Once the fourth candle is placed under the correct painting to solve this MADiSON puzzle, the bells will ring, indicating that Luke must go to the bell tower. In 1987, Luka will be able to take the key from the bell tower, which will open the confessional in 1951. A sign will appear saying: “Hans Göring: 1951.” Luke can take the “i” from the tablet and place it on the tablet in front of Madison Hale’s coffin in 1987. Luca can then take a photo of the coffin to move on to the next puzzle in MADiSON.