To do business in the player market in Diablo Immortal, adventurers will need a semi-premium currency known as platinum. This currency can also be used to create clans or extract skill stones from enchantments, but the main purpose of platinum is to allow players to exchange gems and legendary gems with each other. Unfortunately, the gems that a player would like to get for their build in Diablo Immortal are usually not easy to get. Gem drops and crafting mechanics are heavily RNG dependent, so it can take a long time for players to find the exact gem they’re looking for.

However, the Player Market allows adventurers to trade these hard-to-find Gems and Legendary Gems with each other, making the acquisition process much more accessible. However, players will need platinum to conduct business, as it is impossible to participate in player-to-player trading without this currency. Therefore, understanding how to acquire and earn platinum will be crucial during your Diablo Immortal playthrough, especially in the late game.

Needless to say, the easiest and most convenient way to get platinum is by using real money to make purchases in the Diablo Immortal in-game store. To see the prices for each pack of Platinum, select the Currency tab, where the Eternal Orbs are located, and then select Platinum in the lower right corner. Depending on the player’s availability of funds or his desire to get platinum, the Store is the easiest and most affordable way to purchase it. 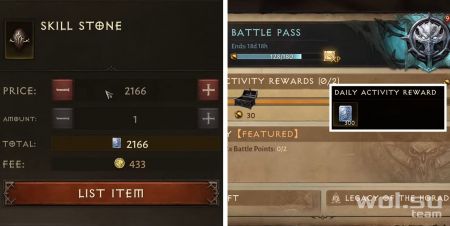 Luckily, there are other ways to get platinum in Diablo Immortal without spending your savings directly. The first way is to advance in the Battle Pass by reaching 120 Battle Points. This achievement can be obtained by completing various tasks, such as growing mobs or completing quests. Upon reaching the 120 daily milestone, adventurers will be rewarded with Platinum ×300. Accordingly, this small amount can accumulate over the course of a week, as a result of which, in seven days, you can get platinum × 2.100.

Another way to earn platinum is to sell skill stones and gems on the market in Diablo Immortal. Naturally, this way of earning depends solely on whether other players will buy other people’s ads. Therefore, the quality and type of gem or skill gem is vital to economic success. The market NPC, Dia, can be found in the southeast corner of Rakkis Square in Westmarch. Keep in mind that only items that have a small “scale” symbol on their icon can be traded in the market.