In Genshin Impact, Lyre of the Winds is a gadget that can be played like a musical instrument and is in high demand.

This item first appeared in the game as part of the Wind Flowers Invitation event. At this time, the inhabitants of Mondstadt sacrificed Anemo to the Archon, Barbatos, wind blowers, and other gifts to those they adore. Players could also take part in various mini-games in honor of the holiday.

In the Windsong quest, players could play the Wind Lyre in a rhythmic mini-game. Even though the event ended a long time ago, players can still get this musical gadget thanks to a recent addition to the game. Like other musical gadgets, players will be able to play the Lyre of the Winds in co-op mode. 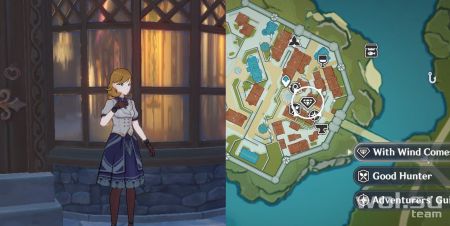 The lyre of the winds has a range from C3 to B5, although there are no sharps or flats in it. Players can play multiple notes at the same time, but they won’t be able to hold the notes since it’s still a stringed instrument. Lyra of the Winds will have different controls for PC, mobile and PS4, so the difficulty of playing on each of them will be different.

Wind Lyre can be found in Mondstadt by NPC Marjorie. Marjorie is the owner of the gift shop With the Wind Comes Glory. This shop sells Character Ascension Materials, Weapon Ascension Materials, Pestilence, Nordic One-Handed Sword Mold, and the Winds of Freedom Memory which is required to unlock Constellations for the Anemo Traveler. Anemo Seals are accepted as currency for items in the regular store; they can be found throughout Mondstadt in chests and at the statue of the Seven Awards.

The special shop can be accessed by talking to Marjorie and choosing the option: “I’d like to buy some special souvenirs, please.” In a special shop, players can find a Festive Balloon, Lyre of the Winds, and Harpastum of the Wind. All of these items have a single supply of 150,000 mora each. As long as players have free pestilence, they can purchase the Lyre of the Winds to play alone or with a friend.