Tunic is often a difficult game to play, and one of the most difficult locations to complete is the Dark Tomb, which can be found in the Overworld. The Dark Tomb is so named because it is pitch dark inside, just like the Rock Tunnel in the first generation of Pokémon games.

Where to find the lantern in Tunic

The only way for players to safely pass through the Dark Tomb is with a lantern, a useful trinket that illuminates the area around you. Finding a flashlight in Tunic can be tricky, but it becomes easier if you break the process down into a few easy steps.

Path to the well 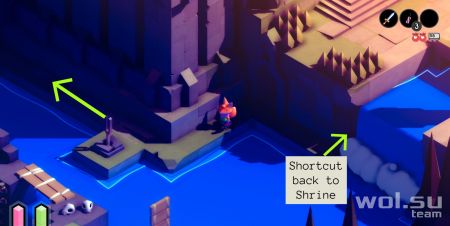 After acquiring the shield, players can exit the room through the doorway at the top of the stairs to find themselves back in the Overworld. The small waterfall on the right hides a short path that leads back to the fox sanctuary in the center of the area, while the path on the left will take players forward. Go around the corner and up the stairs to get a claw from the chest above for an attack upgrade. 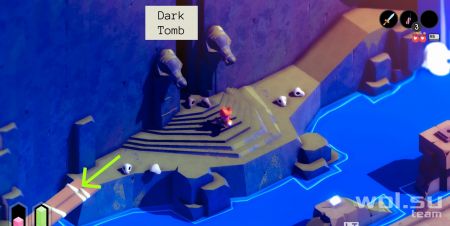 Cross the wooden bridge, but beware of the skull enemies camouflaged on the ground nearby. Deal with them and follow the path behind the waterfall to reach a large thin doorway surrounded by stone skulls. This is the Dark Tomb, a location that players will visit later. For now, keep going left. 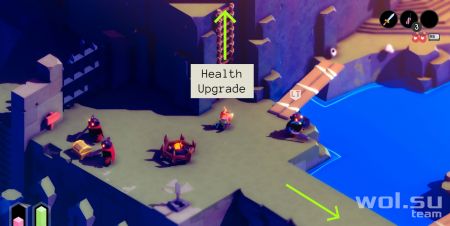 Defeat the three Rudelings in the next area, including the one with the shield, and head up the nearby stairs to get the HP boost flower on top of the cliff. Climb back up and head down to fight two more Rudelings with a shield before reaching a crumbling bridge. 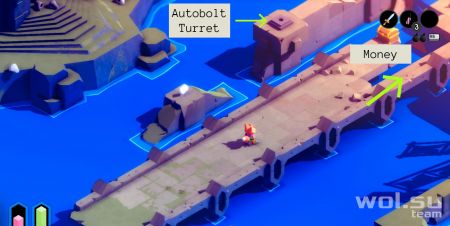 On the other side of the water is an autobolt turret that will quickly kill you if players aren’t careful. Distract Rudeling from the turret to make short work of him, then raise your shield to block the turret’s shots and slowly move along the wooden boards leading to the turret. Once you get close enough, destroy the car and roll to the side to avoid the explosion. Open the nearest chest to receive a small cash reward. 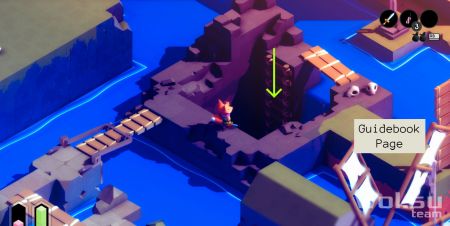 Go down the bridge to fall into a large dark pit surrounded by skulls. Pick up the guide page in front of the other bridge to learn about stat boosts, resurrection, and how strong a character needs to be before facing the Garden Knight. Lower the second bridge to easily access the rest of the Overworld, and then head down the stairs to the Well. 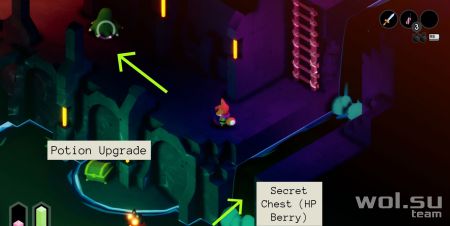 Climb down the first ladder into the well and around the corner to encounter a green octopus enemy. These enemies are spinning fast towards you, so keep your shield up to deflect their blows and take them out with a few swings of your sword. They explode upon death, so keep a safe distance. Head down into the water, take out the second Slorm and Rudeling, and open the nearby chest to get a healing potion. There is also a healing berry in the secret chest behind the lower waterfall. 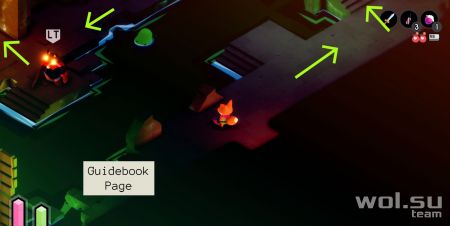 Lure Slorm and Rudeling at the same time towards you; if successful, Rudeling will kill Slorm with a sword strike, and the ensuing explosion will destroy Rudeling. Leave this room through the doorway located behind Rudeling’s starting position. 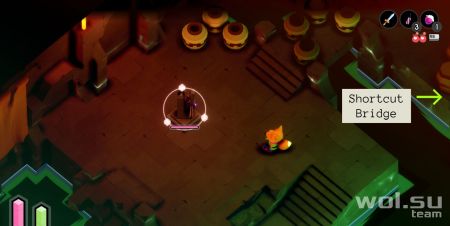 In the next room, you will find a chamber filled with shallow water again. Eliminate two Slorms, then head up the steps to meet the Autobolt turret at the top. This fight is much easier than the fight with the turret outside, as there is much more room to maneuver. Defeat the turret, then go right and go down the stone path to get down the short bridge to the other side of the room. 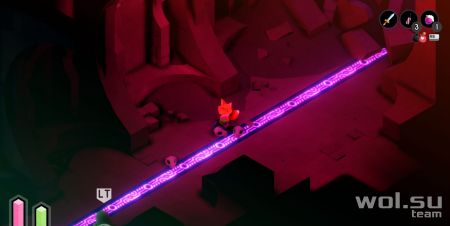 Climb off the short bridge and go past the broken wall into the next room. This room is more like a corridor and is filled with skulls (not enemies) and a few octopuses. Kill the front Slorm to use his explosion to hit two more, then quickly deal with the third one in the back. Exit through the doorway on the right at the end of the room. 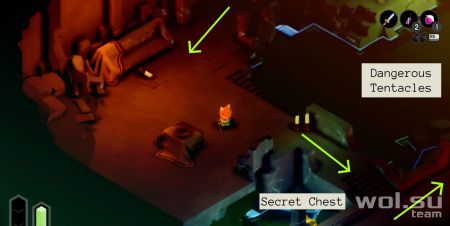 Don’t get too close to the main shallow water area as giant tentacles will come out of it and deal massive damage to you. Instead, follow the path filled with barrels that is adjacent to the wall. Use the barrels to avoid the autobolt turret attacks and then clear out the rudelings on the other side. There is a secret chest in the water below this platform that can be reached via a hidden ladder on the right. 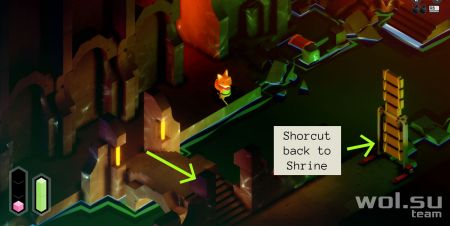 Climb down from the area where the Rudelings were, and then go back to the right and go through the door on the right. Players are now back in the room with the previous guide page, but on the other side. Cross the bridge and head left to cross the short bridge (and save at the fox sanctuary in the next room if needed). 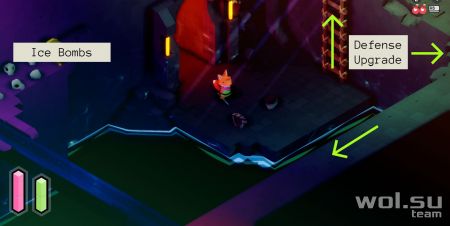 Climb back down the short bridge and go through the doorway on the right to enter a small room with stairs leading up to a higher level. Climb the stairs, defeat the three skull enemies guarding the defensive upgrade in the chest, then go around the corner and look for a line of glowing purple runes on the ground. Follow this line of runes to the back of the room, take out the group of skull enemies on the other side, and grab the ice bombs from the chest. 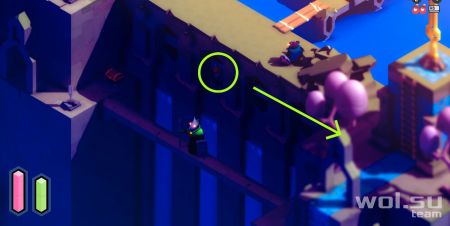 Now go back through the line of purple runes and go into the next room, which is lit only by the glowing runes on the floor. Follow the runes to exit this room and return to the Overworld. The character is now under part of the bridge near the entrance to the Well. Cross this small section of the bridge to enter the next chamber. 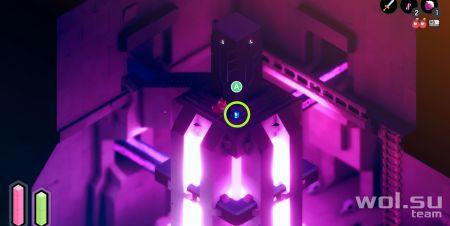 The next room is filled with glowing purple light, and in the center is a tall metal obelisk with three colored emblems on top. On the steps at the foot of the obelisk is a small blue lantern that you can pick up. This adds the lantern to the character’s arsenal permanently, and it will automatically activate whenever the player enters a dark room.