Kili, the Frost Archer is a bloody level 20 boss in V Rising, defeating which grants vampires the blueprint for the tannery, including leather recipes, traveler’s wrappings, and an empty canteen. Leather, in particular, is needed to get high-level equipment and materials in the early stages of the game, and a canteen of water is needed to extend the life of a horse in V Rising.

Defeating Kili, the Frost Archer in V Rising, will also grant players Frost Bat, a vampire ability that fires an explosive projectile that deals magic damage and chills enemy targets hit. This ability is a great CC attack for dealing with groups of hostile mobs or nimble and hard to hit enemies. Before meeting Kili and claiming her rewards, vampires are advised to reach the recommended level of 20 and equip themselves with the best equipment.

Kili can be found at the bandit camp in Farbane Forest, located east of the Forgotten Graveyard and west of Farbane Forest Way Gate. Enemy patrols roam nearby the camp, including several bears. Therefore, vampire fighters are advised to clear the area before engaging the Frost Archer.

How to defeat Kili the Ice Archer in V Rising 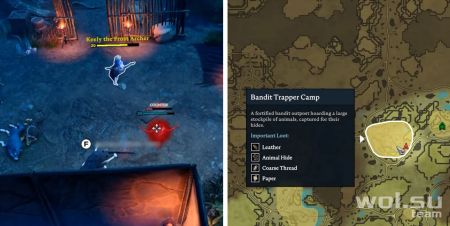 To defeat Kili, the ice archer in V Rising, players will need a basic understanding of how her mechanics work. First of all, how Kili mainly uses ranged attacks, which means that she will always try to keep her distance from the opponent. When she is about to perform an attack, the boss freezes in place for a moment before recharging and firing. This mechanic gives players a fraction of a second to dodge an attack.

Below is a short list of Keely’s abilities that V Rising fans should be aware of before facing her:

If the vampire adventurers decide to fight Kili during the day, it is recommended that you lure her into the square-shaped tent in the center of the camp to avoid the harmful rays of the sun in V Rising.