Before completing the quest for the sorceress Sellen in Elden Ring, you are faced with a difficult choice – to side with Sellen or Jerren, the witch hunter. Sellen is a merchant sorceress that the adventurers met at the beginning of their journey in the Graveyard. After completing her tasks and learning a lot about her origins and motives, many will love Sellen and appreciate her features and character.

On the other hand, the backstory of the witch hunter Jerren is more hazy, shrouded in the fact that the protagonist does not spend as much time with him as with Cellen. Also, his motives are less clear than Sellen’s, however, through Jerren, you will learn dark details of Sellen’s dark past at Raya Lukaria Academy. Thus, after returning to the Great Library, the player is faced with a choice: help Sellen fulfill her dream – to return the academy to a new era – or make her pay for her past by taking the side of Jerren.

While the decision to side with Jerren or Sellen should primarily come down to the player’s preferences and values, Tarnished adventurers should also be aware of the consequences of any choice. Likewise, the rewards for both quest endings are significantly different, with the exception of the Witch Crown, which can be obtained regardless of the outcome.

Which side to take: Jerren or Sellen 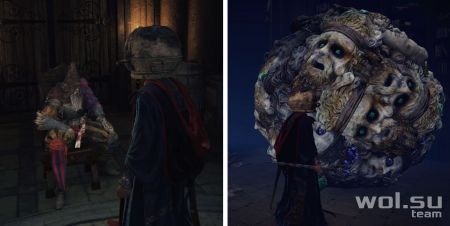 If you choose the side of Jerren

Those who choose to side with Jerren in Elden Ring must join him during his invasion of the world of Sellen in the Great Library. At the end of the fight, you will receive an intelligence-boosting witcher crown of shining stones and Sellen’s bell, which can be given to the Twin Old Handmaids to buy all the spells available from Sellen up to that point. The Witch Hunter will also reward the player for assisting with the Darkness Draconic Forgestone, a legendary upgrade material needed to reach maximum weapon level. The player can then speak to him before entering the library to receive additional dialogue.

If you choose the side of Sellene

Switching to Sellene’s side naturally offers a completely separate ending to the quest line. After Jerren is put to sleep, the protagonist will receive all four pieces of Jerren’s equipment in Elden Ring, an eccentric set. Sellen will then praise you for your efforts and bless their future as Lord of Elden. She will also reward you with Glitterstone Kris, a dagger that can fire Glitterstone Darts at enemies and becomes a powerful PvP weapon when fully upgraded. In addition, she will offer a new sorcery called Spiral Shard in her shop, a rotating two-projection version of Glittering Stone Projectiles that can pierce and rip apart enemies. However, the joyful denouement ends sadly: after the reboot, Sellen will tragically turn into a pitiful Many-sided sphere of sages.

It’s not all doom and gloom in Sellen’s sad ending, though, as the player can return to Master Lusat and Sorcerer Azur to acquire their powerful armor sets, Lusat’s set, and Azur’s set. Keep in mind that those who decide to help Jerren will not have this option after completing the quest.