The Black Armor is a new group of enemies in Genshin Impact introduced in the 2.5 update. They come in various shapes and are available to players to fight in the Three Worlds Gate Offering event in the new Enkanomiya area. These enemies not only participate in the new event, but also provide new items to collect.

Black Armor is an enemy of the Abyss that comes in three varieties: Stormtroopers, Guardsmen, and Bannermen. Each of these enemies also has a different elemental type (Hydro, Cryo, and Pyro, respectively), and all of them drop a new Gem of Armor item when defeated. These gems are required to complete sections of the Three Worlds Gate Offering event, so players will need to know how to deal with these enemies if they plan to take part in the event.

Where to find Black Armor in Genshin Impact 2.5

To fight the Black Armor in Genshin Impact, players will need access to the Enkanomiya Islands. In order to unlock this region, players need to complete the main quests “Moon Abyss” and “Stagnation Water”, after which they will be able to access the Encanomia and the corresponding event “Offering the Gates of the Three Worlds”.

How to beat Black Armor in Genshin Impact 2.5 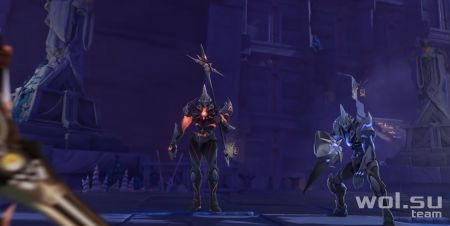 The first type of Black Armor is the Standard Bearer with the Pyro element. When this enemy hits a character with a shield, it generates its own Pyro shield (at the cost of losing some of its health). This shield negates all incoming damage, but slowly breaks down over time and can be destroyed with Elemental Reactions. This enemy can also shoot fireballs at the player, as well as brandish their flame banner for AoE Pyro damage. To fight this enemy, players should make sure they have Hydro or Cryo characters on the team, and try to use healing units rather than shielders to prevent the enemy from generating a shield.

The second variant of this enemy is the Hydro-element Stormtrooper. If the Stormtrooper hits a shielded character, it sacrifices a portion of its health to generate healing energy that heals itself and nearby Black Armor over time. The enemy can also use a hydro spear to hit the player, use a charged version of this attack, or swing the spear to deal AoE Hydro damage. Players will want to defeat this enemy first to prevent them from healing nearby Husks, and bring a Pyro or Cryo Striker with them to deal with them faster.

The last variant of this enemy is the Cryo elemental Guardsman. When a Guardsman attacks a character with a shield, his bow is strengthened by a protective shield, which blocks attacks from the front and increases his own attack (at the cost of losing some health). The enemy can also fire a bow that deals Cryo damage and airstrike that deals AoE Cryo damage. To fight this enemy, players will most likely want to use Pyro, Electro, or Geo damage characters and be sure to attack him from behind.