In Vampire Survivors, Gallo Tower is a map that features magnificent magical artifacts and supposedly “historically accurate” monsters. Introduced in one of the game’s latest updates, the Gallo Tower map features a long vertical layout and offers two unique passive items and two new Relics. Relics include Sorceress Tears, located at the bottom of the roguelike pixmap, and Randomazzo, found north of the starting area.

Sorceress Tears unlocks Hurry Mode in the stage select menu. This mode doubles the hourly lap speed, causing normal laps to reach the 30-minute mark after 15 minutes. However, all time-based events, such as the appearance of enemy waves or evolution chests, will occur at the expected time on the timer. Players can compare Hurry Mode to playing a real-time strategy game at x2 speed, but Vampire Survivors speeds up advancement and spawning speed.

How to unlock the “Gallo Tower” stage 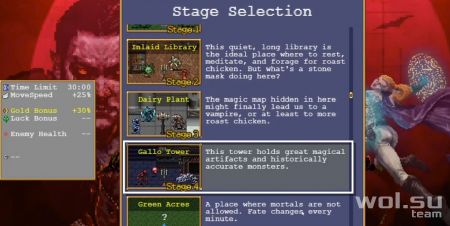 To unlock the “Gallo Tower” map in Vampire Survivors, players must reach level 60 at the Dairy Plant, a stage that becomes available after reaching level 40 in the Inlaid Library. Keep in mind that survivors are not required to complete their run after reaching level 60. Instead, once they are notified that they have reached level 60, they can close the Dairy Plant stage and open the menu to enter the new “Gallo Tower” map.

This procedure is similar to unlocking and using the two new relics in the Gallo Tower discussed above. Players only need to find new items on the map. After returning to the main menu or intentionally dying, the Hurry Mode and the Arcana system will still be unlocked, allowing players to access content without restrictions. Since Gallo Tower is a vertical map, players should consider creating a build that allows them to effectively deal damage when moving from north to south and vice versa. Additionally, players should be careful not to get trapped in the alcoves on the sides of the wall while fighting enemies.