Players who want to unlock Concetta Caciotta in Vampire Survivors must find and open the coffin in Gallo Tower. Although many fans have already found coffins in some other levels of the game, this task may seem somewhat confusing to them. Indeed, finding a coffin in Gallo Tower is quite difficult, and this guide will help players to get the job done.

How to open Concetta Caciotta

Find a coffin in Gallo Tower

The first step to finding the coffin in Gallo Tower is to unlock the Milky Way map. To do this, players must go to the Dairy Plant – a stage that becomes available after reaching level 40 in the Inlaid Library – and follow the green arrow that will appear on the screen. This arrow leads directly to the Milky Way map, and players can find it in the pause menu once it’s obtained.

With the Milky Way map in hand, players must start the Gallo Tower and enter the pause menu. In this menu, the coffin you are interested in will appear as a black and red icon on the map, and now the fans should head towards it. Notably, clicking on the “Show Guides” button in the lower right corner of the pause menu will display arrows pointing to scene items, making it much easier to navigate to the coffin in Gallo Tower.

As players approach the location of the coffin, they will find that they cannot approach it directly. Instead, fans will have to go through a special mirror that is located below the coffin and on the left side of the stage. The image below shows exactly the mirror players are looking for, and the pulsating circle surrounding it should grab their attention. 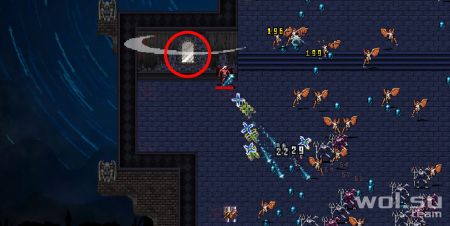 Approaching the mirror, the fans will be transported to a small room where the coffin is located. When this happens, players must simply eliminate the enemies surrounding the coffin and then stand on it to add the Concetta Caciotta to the character select screen. After that, fans will be able to start a new game with this character and try out her unique weapons.

For those players who are wondering, this weapon is the Shadow Pinion and it places drills on the ground as the character walks. The game also features an evolution of Shadow Pinion called Valkyrie Turner. To access this evolution, fans must pick up the Wings passive item.