The Shadow Lottery is an event that happens multiple times a day in Diablo Immortal, and the winner gets a chance to join the Shadow faction. You can take part in the Shadow Lottery by visiting the Westmarch Tavern in Rakkis Square, located on the other side of the building where the Jeweler’s Apprentice is located. There are several requirements that must be met before players can speak with the Mysterious Patron and gain access to the Shadow Lottery.

To unlock the Shadow Lottery, a character must reach level 43 and complete the main quest line in Bilefen. After completing the story in Bilefen, players can visit the Mysterious Patron in Westmarch at 12, 18 or 21 local server time to participate in the Shadow Lottery event in Diablo Immortal. If the character is chosen as the winner, he will have to prove his worth in a series of tests and receive the mark of Akeba. After completing the challenges, the Mark of Akeba can be gifted to the Mysterious Patron to become a Shadow. 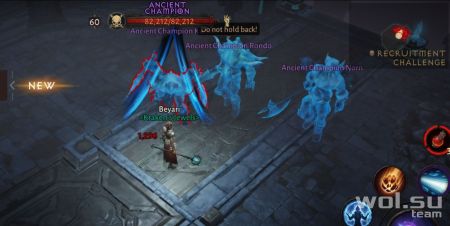 The challenges that must be completed before becoming a Shadow are intended to familiarize players with the actions that will be available to increase their rank in the future. After starting the Shadow Accuracy quest, players will need to speak with Bailey the Bartender to continue the quest, and then enter the Court of Whispers by passing by the Mysterious Patron. Path of Blood is the first challenge and players just need to clear the floor of all enemies.

Next, players need to complete a section of the dungeon in Diablo Immortal known as the vault. Inside the vault, players will need to collect at least 30 essences from fallen enemies while being careful not to let the overseer warn the Immortals. After successfully completing the second trial, players will have to face three Ancient Champions. Ancient champions don’t all start attacking at once, but if they aren’t killed quickly enough, they can all be active at the same time. Defeating them will be fairly easy if players dodge their heavy attacks.

After defeating the Ancient Champions, a chest with the Mark of Akeba will appear, as well as several random rewards. The Sign of Akeba can be turned in by talking to the Mysterious Patron. After becoming a Shadow, players can still participate in the Shadow Lottery to earn more Akeba Tokens, which can be used to invite friends in Diablo Immortal to the Shadow faction. When replaying the Shadow Mettle quest, players will only need to defeat the Ancient Champions again.