The new platformer MultiVersus has four starting characters, and one of them is the dog Jake from the beloved Adventure Time cartoon. This is a highly anticipated game that has been in beta for a while, but will fully release on July 26, 2022. Once the game is released, the creators will likely add new MultiVersus characters to the game for players to unlock.

While Jake the dog can be controlled for free at the start of the game, other characters are available for purchase from the in-game store.

Jake the Dog works best as a melee DPS that specializes in ranged attacks, though his physical melee attacks are also great. Jake is a relatively short character, but he packs a powerful punch—literally. Since Jake can handle himself in combat, he will be a great choice for 1v1 battles in MultiVersus or any teamfights, so players who are looking for a good all-around character should consider leveling up Jake. 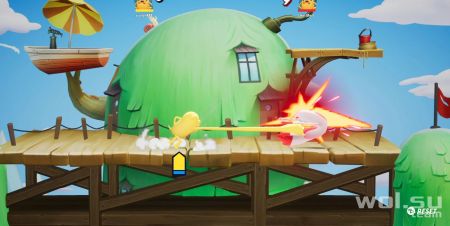 As a melee/DPS hybrid character in MultiVersus, Jake Dog can work well as a ranged offensive player or in front of him dealing basic damage. Players should make use of his ranged attacks, as they have incredible range compared to other melee characters, giving him an advantage. Below is a list of Jake’s best moves:

The dog Jake also has special perks – special abilities. A player can have four perks active at the same time. There are two types of perks: signature perks, which depend on the MultiVersus character, and universal perks, which can be used by any character. Each character has two signature perks that unlock at levels 8 and 10. Jake the Dog’s signature perks are the “Sticky” perk, where enemies touching the stretching Jake are stunned, making them easier to hit, and the “Stay Flexible” perk, where Jake’s “Home” ability returns him into the air after hitting the ground.