Sifu’s elegant and tactical combat implements reactive and predictive understanding of the enemy. Nuances include special Sifu skills that can be unlocked all the time, as well as various environmental features that players can use to their advantage.

For example, a Sifu score multiplier can be used, and the environment often has interactive elements that players can hit or throw to gain an advantage. However, these nuances come with experience and are of real benefit only after the players master the basic combat mechanics of Sifu. Offensive strikes have their art, but the true perfection of combat comes when the player learns to parry, dodge, and block attacks. 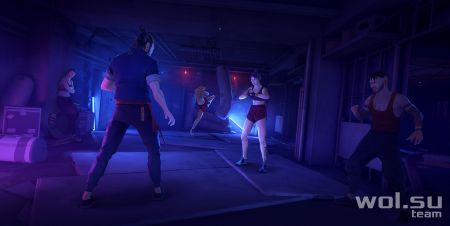 In order to parry attacks in Sifu, players must perfectly block in response to an opponent’s attack. The parry time is not the same for different opponents, and accuracy is required for a reliable parry. Players will know when an enemy attack has been successfully parried by a visual indicator that glows red at the parry location.

Regular mob enemies remain stunned and open to counterattacks for a short time. Not all attacks can be parried, but successful parries in Sifu do a lot of structure damage.

In order to dodge attacks in Sifu, there are several important options to consider. There is a “dash” move that quickly moves the player using the R2 button on PS4 or PS5 and Shift on PC. But in combat, this technique is ineffective, as the enemies rush at the players faster than they can jump back. Instead, players must hold L1 on PS4 or PS5 and spacebar on PC. Players must then use the d-pad or movement keys to dodge in a certain direction and avoid attacks. Here’s the best way to dodge attacks in Sifu that break through the player’s defenses and the Structure bar.

To block attacks in Sifu, players must simply hold down the same button or key used to dodge without moving in a specific direction. This will protect the player from immediate health bar damage. However, blocked attacks do a lot of damage to a bar of the player’s structure, which eventually breaks and deals significant damage to the player’s health.

Reckless blocking is rarely recommended in Sifu unless players are trying to avoid immediate damage or if their structure bar is relatively high. Otherwise, parries and dodges are much more effective in combat.

Parries, dodges, and blocks are all paramount to combat in Sifu and have their place in every duel, but mastering all of these techniques will create a well-prepared playstyle that can deal with any opponent.