Tower of Fantasy features vehicles, unique rides that wanderers can use to move around the world. Naturally, these mount-like contraptions allow players to move faster than their normal running speed. As a result, they can get to new locations faster or places further away from fast travel points. It’s certainly important to take the time to immerse yourself in the overall sci-fi open world of Tower of Fantasy, but having a fast vehicle can cut down on unnecessary travel time.

Tower of Fantasy has several different vehicles, such as the Falcon motorcycle, the Monocross robotic unicorn, or the Dust Wheel. Over time, other interesting vehicles are likely to appear as the game receives more and more content and extensive updates.

However, the Wanderers are no doubt looking forward to unlocking their first vehicle in Tower of Fantasy. While the early segments of the game don’t require much ground movement, having a cool vehicle will certainly make moving around the area more fun. However, in order to access the vehicle menu, wanderers must first complete a specific quest in the Tower of Fantasy. 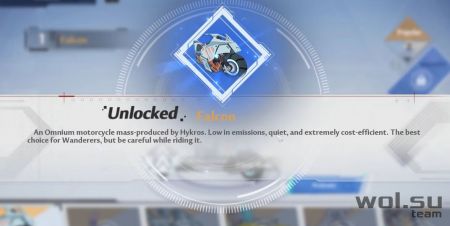 To unlock the ability to ride vehicles in the Tower of Fantasy, Wanderers must complete the quest A Gift from Franz. According to Gamepur, this quest will only become available after the protagonist reaches chapters 1-4 of the main campaign. After completing a few quests and adventures on the Astra, players will be able to teleport to Hikros, a floating city in the sky. Here the Wanderers will have to talk to several NPCs and complete some simple tasks. However, when everything was in order, they could travel to the upper levels of Hikros and meet up with Cobalt-B.

After a few dialogues, Cobalt-B will show the Wanderers their new vehicle, a futuristic Omnium motorcycle called the Falcon. After talking to the motorcycle, you will have access to the vehicles menu in the Tower of Fantasy. This achievement will allow you to activate all additional vehicles they have acquired up to this point, such as the mysterious floating cube, vehicle 2613. To equip a vehicle in Tower of Fantasy, open the half-pause menu and select “Vehicle”. Select Falcon and click Activate. After closing the screen, press the V key to get into the vehicle in Tower of Fantasy.