In MADiSON, the Red Safe in Grandpa’s office can be opened in the later part of the game using one of the drawings in Luca’s notebook. Players will need to solve puzzles and progress through the story until a drawing appears, which has three curved lines pointing in a certain direction, and each of them has checkmarks that help determine the correct combination from the red safe.

In order to unlock the drawing that reveals the combination from the Red Safe, players will need to solve a puzzle in the workshop. To solve the cuckoo clock puzzle in MADiSON, Luca must swap the clock faces downstairs with those found in the house. Around every cuckoo clock there is a group of clocks that are stuck at a certain time. This specifies which clock face Luke should use for each cuckoo clock.

Solving the cuckoo clock puzzle is quite easy if you determine the clue from the clock behind it. The clock faces below can be swapped in any order with those in the first hallway, in the kitchen, attic, and outside of Grandpa’s office. However, the first dial can only be obtained by matching the combination to the green safe in MADiSON. After you swap all the clock faces, Luka can take a picture of the door with the clock on it, after which a drawing with a combination from the Red Safe will appear in his notebook.

How to get Johnny’s room key in MADiSON 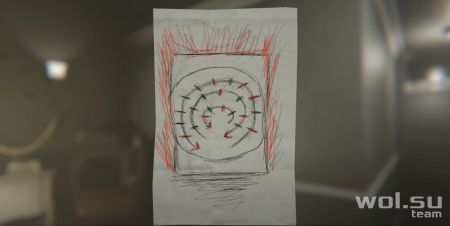 The figure will show a rectangle with a circle in the center and three unfinished circles inside it. Lines with arrows at one end and checkmarks along the curve are the clues needed to open the red safe. The arrows indicate which direction to turn the dial, and the intersecting marks show how many times to turn it.

The combination can be entered starting from the outer line and moving deeper. With a clue in hand, Luca is able to return to Grandpa’s office and open the red safe. Inside it will be the key to Johnny’s room and Luka will be able to access this new area to solve the animal scale puzzle in MADiSON. Together with the key to the red safe, the next task will require the clock obtained after solving the cuckoo puzzle.

After opening the Red Safe, Luka can go to Johnny’s room and use the chalkboard puzzle to solve the animal scale puzzle. This is one of the last tasks in the game, so it may take some time to complete, but the animals in the puzzle match the symbols on the hooks where the weights need to be placed. The red safe can only be opened at the end of the MADiSON game and is part of the story so players don’t have to worry about missing it.