In Vampire Survivors, The Bone Zone is the second difficult stage, which appeared with the release of update 0.5.1. However, players will not immediately be able to get to this difficult stage, since it must first be unlocked. Luckily, unlocking The Bone Zone stage isn’t that hard, and this guide has detailed information on exactly how fans should approach the challenge.

How to unlock “The Bone Zone” stage

Players wishing to experience The Bone Zone must make an effort to unlock the Hyper Mode in three normal stages. For the uninitiated, Hyper Mode imposes many modifiers on the appropriate level, increasing movement speed, number of enemies and more, and the way it is obtained varies from stage to stage. Here are the details on exactly how Hyper Mode is unlocked at each stage, and any three will do to access The Bone Zone:

As players have probably noticed, the key to unlocking Hyper Mode is to live past the 25-minute mark. Of course, this can be done with any character on the list, but fans who are keen to open this stage as quickly as possible may want to take one of the best Vampire Survivors characters to these regular stages. These players can also do a little research on the best weapons and passive items in the game to get an even bigger edge on their runs.

Effects of the “The Bone Zone” stage

For those players who want to learn more about the “The Bone Zone” stage, part of its difficulty is due to the fact that the opponent’s multipliers grow throughout the game. More precisely, the movement speed and health multipliers applied to enemies increase every minute, by 0.05 and 0.03 respectively. In addition, at this stage, fans will receive nothing but coins from lamps, which means they will not have any supplements that would help them deal with more powerful opponents. 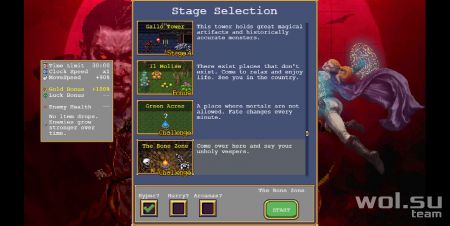 However, during the “The Bone Zone” stage, players gain increased movement speed, allowing them to more easily evade pursuers. Additional gold is also given at this difficult stage, and although some fans have already purchased all the characters and PowerUps before proceeding with the level, this is a nice bonus for those who have not.