Tower of Fantasy is a PvE-focused MMORPG that also has PvP activities for the more competitive players. The main PvP mode in the game is the Apex League, and it becomes available only after a certain condition is met. On the other hand, players can participate in the Tower of Fantasy combat system known as “sparring”, which can be started at any level, anywhere, anytime. To spar with another player, open their profile window and select the “Sparring” option to challenge them to a duel.

However, the main disadvantage of Tower of Fantasy sparring is that there are no restrictions on the two players in terms of Wanderer level, equipment level, or SSR level. In other words, the maximum account can fight the F2P player or the dolphin if the other side agrees to the duel. Of course, such a situation is unlikely to arise, since in the open world of Aesperia there is no monetary incentive or achievement-related motivation to defeat another Wanderer. In contrast, the Apex League has a more organized system of rewards, leaderboards, and titles for those who participate in this PvP.

To open PvP through the Apex League in Tower of Fantasy, players must reach Wanderer level 31, after which the opportunity to participate will become available in the Adventure Guide under the Challenges tab. Apex League advertises itself as “balanced PvP”, however experienced players may argue that this system is not balanced.

How PvP works in Tower Of Fantasy 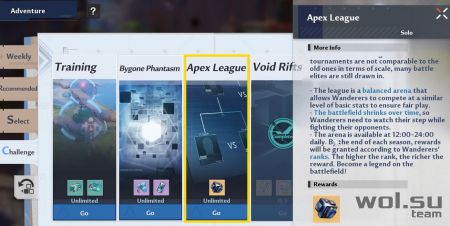 However, those who participate in the Apex League and earn matches to climb the ranks will receive the Season Title and Dark Crystals for their efforts. Beginners will start their PvP journey in Tower of Fantasy as a private. As they win or lose matches, their rank will gradually become more and more significant: Sergeant, Star General or Grand Marshal – the highest rank in the Apex League. Those who manage to reach the rank of Grand Marshal will receive the Dust Wheeler, a vehicle reminiscent of the Star Wars TSMEU-6 wheeled bicycle. Achieving this status is far from easy, which is why this mount is probably the rarest vehicle in Tower of Fantasy.

Like other aspects of the game’s gameplay, Apex League can be fun, but somewhat underdeveloped. If there is no real player in front of the fighter, their opponent will be replaced by an artificial intelligence with a common name. If the opponent does turn out to be another player, then there is a good chance that the server delay will make this experience very unattractive. So while Apex League’s rating and 1v1 combat system is theoretically functional, most players will likely not be participating in Tower of Fantasy PvP due to performance issues or imbalances.