Announcer Packs are one of the many MultiVersus features that allow players to customize their gameplay experience. By unlocking and enabling various commentators, fans can get their favorite characters to comment in-game during battles. MultiVersus Announcer Packs include the voices of Harley Quinn, Batman and Arya Stark. However, these annotators are not included by default in the main MultiVersus package. Instead, players will have to purchase them from the in-game store using Gleamium.

Gleamium is the primary currency that fans can use to purchase characters, emotes, and other cosmetic items such as the announcer packs mentioned above. Since MultiVersus is a free-to-play game, it is not surprising that a large list of game features are closed behind a premium fee and cannot be unlocked during the game. However, those looking to purchase Announcer Packs for their favorite characters will need to spend real money if they want to access this feature.

To get Commentator Packs in MultiVersus, go to the Collection section in the main menu. At the bottom of the screen, after exploring Global Cosmetics, you will see Ringouts, Banners, Badges, and Announcers. Selecting “Announcers” will open a window with different characters to choose from, each of which costs a certain amount of Gleamium. Spend the required amount to unlock the package and use the announcer in the game. 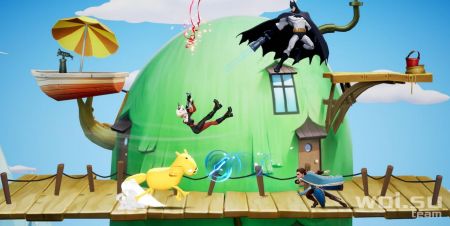 As noted earlier, the only way to get Gleamium is to spend real money. More precisely, Gleamium is acquired mainly through packages. Additionally, those who purchase one of the three Founder’s Packs can receive bonus items, including most of the Gleamium. Of course, the price of the package will determine how much in-game currency the player will receive. The standard edition costs 2.499 rubles. The Deluxe Edition is 4.199 rubles, and the Premium Edition can be purchased for 6.999 rubles. In terms of bundles, below is a list of offers and their corresponding prices for microtransactions in MultiVersus:

Most announcer packs should cost 100 Gleamium, which is 49 rubles. This price is a moderately small price to pay for listening to your favorite character during the game. Unfortunately, those who only want to play the game as a F2P player will not be able to unlock Announcer Packs in MultiVersus without spending real money.