The Devourer is a generic structure in V Rising used to dismantle equipment, items, and components, turning them into raw materials. The Devourer will eat any item placed in its mouth until it turns into elemental crafting materials. This useful gadget is a great way to get rid of unwanted items in V Rising and reclaim resources at the same time.

How to open Devourer

To unlock Devourer in V Rising, vampire adventurers need to defeat Lidia the Chaos Archer, a level 26 enemy that roams the roads of Farbane Woods. Unlike typical world bosses, she does not stand in one place and does not have a unique lair. Instead, she is constantly on the move. Killing her will unlock Chaos Volley, a basic ability that fires two Chaos Bolts that deal significant magic damage and cause Chaos Burn. Additionally, by eating her V Blood, players will receive blueprints for the Devourer structure, which can be built with 12 Planks and 6 Copper Ingots.

Vampires in V Rising can craft planks by refining 20 Lumber at the Sawmill in their Castle. Copper ingots are smelted from 20 Copper Ore, which can be obtained from Copper Veins found in Farbane Woods. Once players have the required materials, they can assemble their Devourer. 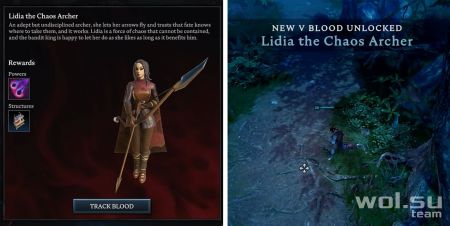 To use the Devourer in V Rising, place it anywhere within the borders of Castle Heart. First, make sure Heart has enough Blood Essence to power Devourer. Then place any disposable item inside to turn it into a raw material. Keep in mind that there should be a “Salvageable” label above the item’s description. If this mark is missing, the item cannot be eaten by the Devourer. For example, if you place a reinforced Bone Sword in the mouth of the Structure, you can get 90 Stone and 3 Planks. However, putting something like the Whetstone in V Rising into the monster’s mouth will have no effect, as the item is unsalvable.

When the Devourer is active, the giant maw opens and closes with a chomping sound. If the Structure is inactive or the rescue is completed, the mouth remains open and the tongue moves. Vampires can place up to eight items in the Devourer and speed up the transformation process by 25% by placing the construct in an enclosed castle room.