One of the best transportation tools in Tower of Fantasy is the jetpack, an SR relic that lifts the user into the air. As soon as its owner reaches a certain height, the satchel will go into hover mode. After that, the wanderer can hover in the direction of the target, gradually descending, or spend some stamina to rise a little higher. Keep in mind that this relic in Tower of Fantasy will constantly drain stamina while the player is in the air. Therefore, it is necessary to monitor the endurance indicator in order to prevent falling to the ground.

The Jetpack in Tower of Fantasy has no combat abilities, as it is purely a means of transportation. However, it can be upgraded by leveling up, each granting a unique buff potentially useful to the player in combat. For example, lvl 2 allows the Wanderer to perform a stun attack if he slides for more than 3 seconds, and lvl 4 cancels any physical damage by 1.5% while the Relic is equipped. Thus, the jetpack can be useful not only in flight.

To unlock the jetpack, Wanderers only need to follow the main storyline of the game. This device is the first relic that newcomers to Tower of Fantasy will receive, which means they will receive a jetpack soon after starting their journey. Conversely, those who are distracted by exploring the open world may get confused about when they unlock the relic. 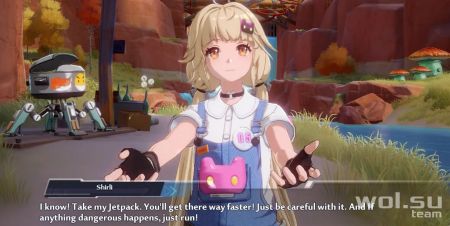 Accordingly, below are a few steps that beginners can follow to unlock the jetpack in Tower of Fantasy:

After that, the player will be able to freely use his jetpack whenever and however he wants. While the default jetpack is nowhere near as obnoxious to look at, those looking for a relic with a more flashy appearance can obtain and equip the Orion Jetpack SSR. This Standard SR Relic skin can be obtained for free from the pre-registration rewards screen. After reaching 2,000,000 pre-registrations, Perfect World has given Tower of Fantasy fans this free cosmetic gift to brighten up their flight through Esperia.