However, vehicle maintenance is not a feature that is available from the start of the game or after Tower of Fantasy fans get their first vehicle, the Falcon. Rather, players will unlock the ability to service their vehicle after reaching Wanderer level 32. Other factors such as the region they have reached or where they are in the main quest line is irrelevant.

Once you reach level 32 in Tower of Fantasy, open the “Vehicles” menu and select the “Maintain” tab. A small window in the upper right corner will display several materials needed to upgrade your mount in Tower of Fantasy. As mentioned above, after reaching level milestones, set rewards will become available. For example, the player will receive 20 dark crystals after reaching maintenance level 5 and will be able to dye their Falcon pink at level 35. However, remember that the maintenance level of a vehicle cannot exceed the Wanderer level. 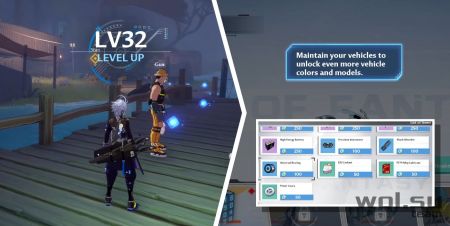 In order to increase the level of car maintenance in Tower of Fantasy, players must collect certain materials that will begin to appear in the world after the player reaches level 32 of the Wanderer. Also, players can get these components from password chests, robot enemies, or the support store. Robotic mobs include any enemies with mechanical parts, such as the Frost Bot world boss. As for the Support Shop, players will need Support Points earned by participating in co-op activities such as Co-Op in Tower of Fantasy.

In addition, friends or crew members are another source of vehicle maintenance parts in Tower of Fantasy. When performing maintenance, players will notice a second option called “Request Help”. When this button is pressed, all the player’s friends and their crews will appear on the screen. In this window, players can request missing components from their friends or crew members. Naturally, this technique is highly dependent on the generosity of others, but it is still a suitable vehicle for obtaining certain upgrade materials in Tower of Fantasy.