Even though the level cap is 40, players can still gain experience for their character after reaching the max level. Instead, experience will go toward unlocking Mythic Points, which players can spend on increasing their hero stats, loot luck, and many other stats. The Mythic Rank system works on the same level system, which means that all the best Tiny Tina’s Wonderlands experience farms will be useful to players after reaching the maximum level.

Mythic ranks work on a rotating skill tree system. There are four mythic rank trees that players can invest mythic points into: Druid, Mage, Blademaster, and Dead Eye. Players will be limited in where they can spend their Mythic Points as they will only have access to a level of one tree at a time, with the available tree changing clockwise around the screen. This means that players will be forced to invest the same amount of points into each Mythic Rank Tree as their Mythic Rank increases.

How to unlock mythic ranks in Tiny Tina’s Wonderlands 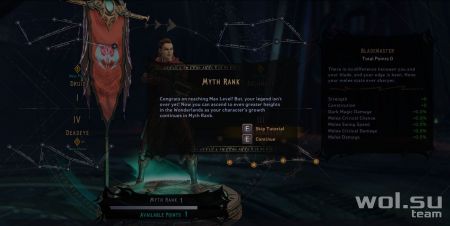 While traveling through Tiny Tina’s Wonderland, players will eventually unlock the Mythic Rank system. Unlike similar systems from other games in the Borderlands series, the Mythic Rank system does not require the player to complete the main story. Instead, the system is unlocked the moment the player character reaches level 40. After reaching the maximum level, all further experience received by the player will go towards increasing his mythical ranks.

Mythic ranks have no limit, allowing players to accumulate more and more stats as they progress through the game. Most importantly, Mythic Ranks is an account-wide progression system. When any character on the player’s account reaches the maximum level, he automatically receives benefits and participates in increasing the mythic rank of the account. This makes for a system that doesn’t penalize players for wanting to try all the classes Tiny Tina’s Wonderlands has to offer. Players can enjoy playing at their own pace, in their own way, and still gain experience in this exciting end game progression system for Tiny Tina’s Wonderlands.