Genshin Impact Serpent Cave features a new World Boss, the Ruin Serpent. Players need to find this subzone if they want to fight this boss. Serpent of Ruins drops a new type of ascension material – Runic Fang. While none of the characters are currently using this material, two new characters that will be added in version 2.7 of Genshin Impact, Kuki Shinobu and Ye Lan, are rumored to need this material in order to ascend, so players may want to loot it beforehand. this boss.

Where to find the Cave of the Serpent 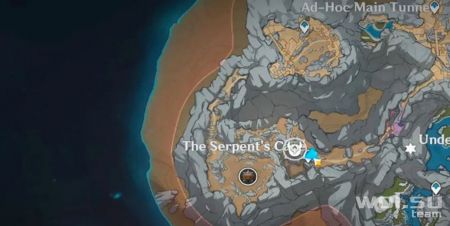 The Serpent Cave in Genshin Impact is located in the underground mines in part of the Rift. Because the Rift is a huge network of tunnels and caverns, the Serpent Cave can be hard to find at first. It’s best to unlock as many teleportation points as possible so that traveling through the Rift is easy.

How to get to the Serpent’s Cave

To get to the Cave of the Serpent, start exploring the map of the Rift: Underground Mines. There are three teleportation points in the Temporary Main Gallery, and you need to teleport directly to the southeast of the point where Jin Wu (who will upgrade the Lightstone Adjuvant) is located (the point in the lower right corner of the Temporary Main Gallery). Once you’re there, there will be a ladder next to the player. Continue up the stairs until a bridge appears across the gap. Cross the bridge, probably encountering treasure hunters, and climb the last ladder located on the other side of the bridge.

Directly in front of the player will be a small tunnel with mini-map rails. The player must walk through this adit – it is quite long – and eventually a large cavern filled with dark mud will open up. Keep going straight as this cave leads straight to the Serpent’s Cave. Once you’re in the Serpent’s Cave, there will be a teleportation point to the player’s right, as well as one Lumenspar (if the player hasn’t picked it up already). The world boss Ruin Serpent can be seen through the large gap, burrowing in the ground. Players can simply jump across the chasm if they want to challenge the boss.

If desired, players can create a short path in the cave, which greatly simplifies the passage from the Temporary Main Adit to the Cave of the Serpent. From the teleportation point in the Cave of the Serpent, you can go down to the boss arena, keeping to the right so as not to hit him. They can head to the back right side of the boss arena where there is a steep slope up. Climb this slope and return to the large tunnel it leads to, where there is another Lumenspar. Behind the lumenspar on the ground there are several gears that can be interacted with (one of them contains a miner’s key, which is needed for the gate in the Temporary Main Adit), as well as powers. Follow the Fairy to the back of the tunnel where there are three explosive barrels. Blow up these barrels (best done with a bow to avoid damage) and the wall behind them will be destroyed, creating a shortcut across the chasm in Genshin Impact.