In Elden Ring, players can access Giant’s Pinnacle by using Rold’s Big Lift. Before players can get to this hard-to-reach area in the Interearth, they need to get Rold’s Medallion to unlock the large eastern region, and both pieces of the Holy Tree’s Arcane Medallion to unlock the western region. The pinnacle of the giants in Elden Ring is a tricky end-game location, so players need to be leveled up before heading into this dangerous area. In addition, difficult bosses and side quests can be found in this region. While some of the optional bosses can be challenging, they offer lucrative rewards.

Where to find Rold’s medallions

To find Rold’s medallions, players need to complete the game until they reach Leindell, the kingdom’s capital. There, players will need to defeat the boss Morgott, the Omen King. To make this fight easier, players can use False Tear or choose Ashes of War: Frost Stomp. After players successfully defeat Morgott, the Omen King, they must speak with Melina to receive Rold’s Medallion.

After obtaining Rold’s Medallion, players can travel northeast through the Forbidden Lands until they reach grace at Rold’s Grand Elevator. Along this route, players will encounter an Ebon Blade Kin boss that can either be fought or dodged. In the Place of Grace, players must climb the stairs to the lift. Climbing upstairs, players will find two large statues of guardians with spears. The area in front of the statues is marked with a circle, and players must stand in a circle to select “Pick Up the Medallion” and use Rold’s Medallion to get to the Giant’s Peaks.

How to get to the western area in Giant’s Peaks 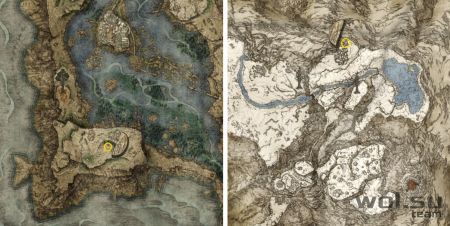 To get to the western part of this region, players need to obtain two pieces of the Holy Tree’s Secret Medallion and use them in Rold’s Grand Elevator. To find the right half of this medallion, players must travel to Lakeland Lirunia: Albino Village, which can be found in the southwest of Lakeland Lirunia. Once there, players must follow the path from the Place of Grace and quickly pass the enemy with a fire weapon. Players will spot a barrel that needs to be bypassed until an NPC emerges from the barrel. Players will need to talk to this NPC until he gives them the Arcane Holy Tree Medallion (right). Please note that players may need to speak to this NPC several times in order to claim their prize.

To find the left half of the medallion, players will need to start from the east side of the Giant’s Peak. After descending on Rold’s Grand Lift, players must head north and follow the cliffs until they reach Castle Sol. At this location, players will need to defeat Commander Niall. After defeating the enemy, players must follow the hidden path that is behind where he was standing, and this path will lead them to the Secret Holy Tree Medallion (on the left).

Once players have obtained the right and left half of the Secret Holy Tree Medallion, they will be able to return to Rold’s Grand Elevator. By displaying the completed medallion to the statues, players will be able to enter the western part of the Giant’s Peak.