Before players can get to the Cloud Forest in the Hot Wheels expansion, they will have to travel to Forest Falls in Forza Horizon 5. Once the DLC is installed, an icon will appear on the map showing where players need to go. Upon reaching the icon, a scene will begin that will direct players up the ramp leading to the Hot Wheels Park.

During this scene, the drivers will retain control of their car, but they will not be able to deviate from the track until the tutorial part of the add-on ends. Once players have full control of the car, they will be able to reach Forest Falls by driving along the northern path that branches off from the Nexus. In addition, the Cloud Forest can be accessed along the road north of the Ice Cauldron. 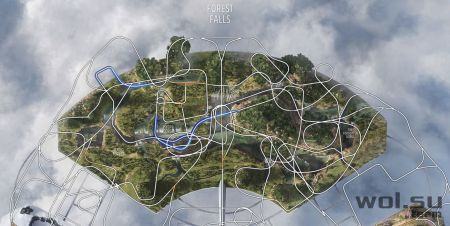 To get to the Cloud Forest, drivers need to go to the southwestern part of the Forest Falls map, namely to the west of the Hydra Gorge. Hydra’s Gorge, Hydra’s Revenge, and Forgotten Gorge are available in Forest Falls if you go to the central, northern, and eastern parts of the map, respectively. The Cloud Forest is a relatively large part of the map and is hard to miss when moving west if players are heading west from the base of the Hydra Gorge Falls.

There are several locations in the Cloud Forest, and visiting them can take a long time. Luckily, those who purchased the Buenas Vistas house at the start of the game can quickly travel to any point on the map, even if it’s not a specified location. It normally costs players 10,000 credits to fast travel anywhere on the map, but those who have destroyed all 50 fast travel boards in the base game of Forza Horizon 5 will be able to take advantage of the price reduction in the Hot Wheels expansion. By destroying all 50 boards, players will be able to travel to any location in Forest Falls for free.