In Raft, you’ll get the coordinates to get to Varuna Point from Tangaroa, as a reward for dodging all those butler bots. As you approach the twin buildings, you will notice that they are actually two flooded skyscrapers from pre-Flood times.

Your main goal is to gain access to the smaller building; using the giant crane from the larger building, you can make a hole in the roof. Head down and you’ll get the coordinates for the next step in your floating adventure. The main problem you will face, of course, is that the faucet key is missing. 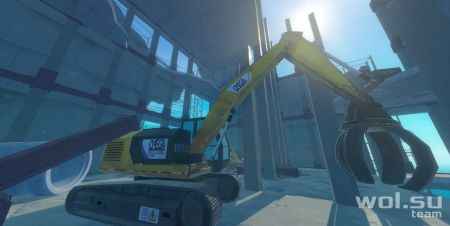 You can climb into the crane cabin if you wish, but there isn’t much you can do right now. Instead, we need to focus on getting the faucet key. Various gizmos and MacGuffins that we need to pick up are under water. You will notice that there are two groups of brightly colored and very deadly jellyfish under the water, blocking the two entrances. They will move, but only under the influence of light.

Tip: It is highly recommended that you bring oxygen tanks and fins for this exploration. There are more and more sources of oxygen as you go down, but you don’t want to run out of them.

You need to fix the spotlight attached to the side wall of the building in order to move the jellyfish blocking the entrance to the circular path. There are four parts of the spotlight in total, and they are all inside the building with the crane. Go through the hole and follow the painted “G” signs on the walls; all the parts are located quite close to each other, so getting them all at once is not difficult. Just try to destroy the angler fish that patrol the corridors as safely as possible.

Once you have collected all the parts, go just below the place where you entered the building and fix the broken spotlight. After that, it will shine on the path, causing the jellyfish to disperse and allowing you to enter. 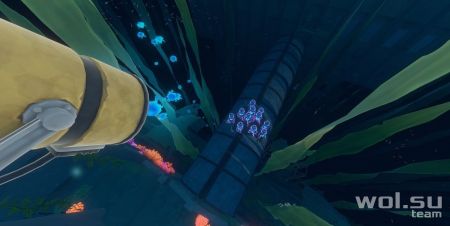 The next zone has a lot of spike traps and a lot of explanations; don’t let the voice recordings distract you from the wires strewn all over the floor. Eventually you’ll come across a room with a mother trap key and a blueprint for an upgraded headlight, keep following the “G” signs on the walls. You will come to what looks like a garage door. When you get to the door, you will find a rather large and rather scary rhinoceros shark in front of you. 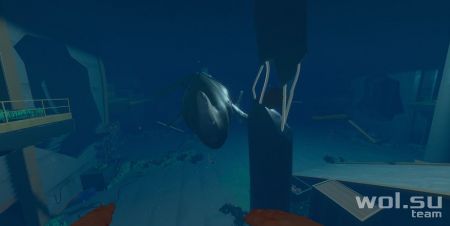 At first, it may seem like an impossible task to kill a rhinoceros shark: it is very fast and seems to want to leave as soon as it damages you. The idea is to lure the shark into ramming it into the pillars that support the room. After she damages them, you can take one of the explosive barrels in the center of the room and place it inside the broken pillar. If you lure a shark into ramming an explosive column, it will explode and deal damage. You will have to do this four times in the beginning, and then make your way up through the hole the shark has created.

The pillars in the second room will have to be broken with two battering rams, but the idea of ​​setting up explosive barrels remains the same. Once you’ve destroyed all the pillars in this area, move up again. You will notice that this time there is only one column. Three rams from a shark, insert a barrel, success.

Note: The last pillar is covered with metal sheets on its lower half, making it only vulnerable to attack from the middle up.

This has already been said, but this encounter becomes much easier if you have oxygen and fins: the extra swimming speed is vital to dodge a rhinoceros shark ram if you find yourself in an open area, and the extra time before how to replenish air, will allow you to dictate the pace of the fight.

Tip: There are plenty of oxygen sources in these areas, but going to them while the rhinoceros shark is patrolling can be risky. Wait for her to ram the pillar to replenish her oxygen supply.

When the rhinoceros shark is dead, you can loot its body to get a lot of shark meat and an incredibly large trophy for your raft. The faucet key and the blueprint for the wind turbine are your reward for fighting such a fearsome creature.

Go back outside and climb up the side wall of the building with the crane, you can use the scaffolding outside and then just climb the ladder into the cab. Be sure to inspect the entire building, as there are a lot of resources there, not to mention the blueprint for the electric grill. Use the key in the crane cabin to drop the payload. Enter the newly created entrance and you will be rewarded with the coordinates of the next destination.