The developers of Fall Guys: Ultimate Knockout recently announced an in-game Sonic event where players can complete a series of challenges to earn fantastic in-game cosmetics, as well as kudos that players can use to purchase even more cosmetics from the in-game store. items. These quests will be available for five days and can only be completed in the limited-time Bean Hill game mode.

Fall Guys, like many other games, also includes a set of daily quests where players can compete for the chance to collect more kudos in order to purchase Fall Guys cosmetic items from the in-game store. These missions can be completed in various game modes, such as Squad Shows or Time-limited Game Modes.

The game mode for these challenges in Fall Guys includes a map with jump pads, pipes, and boosters that will require players to run as fast as they can and collect rings. Rings will respawn some time after they are arranged, and each round has a specific target for the number of rings that need to be collected in order to advance to the next stage. 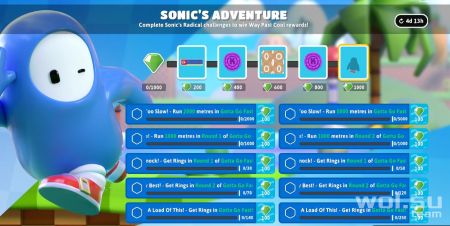 As seen in the image above, these challenges are simple and should be relatively easy for players to complete within a few rounds of the required Fall Guys game mode. What’s more, since the point of this game mode is for players to run around and collect floating rings, there’s not much need for an action plan as they will be done naturally. Fortunately, there is no need to go through the game the first time around, and the furthest that players will have to go in the game is the second round, which is easier.

Awards include the following:

Players can equip these cosmetic items in Fall Guys to use in-game and show off to other players. In addition, Fall Guys has a lot of crossovers in the game, including The Jungle Book, so players should expect more Fall Guys cosmetics in the future.