In Crusader Kings III, spending money is much easier than making money. Most investments require a return of several years, and there are almost always other things that require your financial attention. Having a lot of gold in your treasury makes the game much easier, but getting to that level can require investment and preparation over many generations.

Below are a few ways to increase wealth, both for short-term cash injections and long-term growth. Whatever you plan to use the money for, these methods will help you do it. 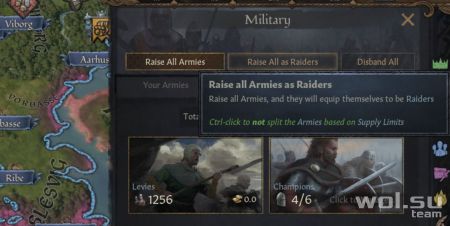 If your culture, government, or religion allows raiding, sending armies to plunder rich lands is an easy way to get some quick cash. Raise your armies as raiders so they can pillage and loot. If raiding is allowed, the army will be considered hostile to the owner of any land outside of your kingdom that it enters. Be sure to learn the best raiding strategies before you raise an army!

Raider armies fight and besiege normally, but do not generate war points. Instead, they receive loot when they successfully lay siege to a stronghold. Larger armies can take more loot with them, and when they return to your land, their loot is converted directly into money for your treasury.

Wealthier holdings yield more loot when raiding, so look for areas with a high level of development close enough that you can easily get in and out. The army of raiders loses the loot if they are defeated in battle, and if the army is completely destroyed, then the loot too.

As an added bonus, raiders also have a chance to capture prisoners after a successful siege, allowing you to buy them back for more gold.

Non-raiding societies can achieve a similar effect by declaring war on an easily defeated neighbor, but the money earned from sieges in a real war is much less than that earned in a raid. In any case, remember that armies require expenses, so be quick or your troops will eat up all the profits you can make.

Arrest and ransom of criminals 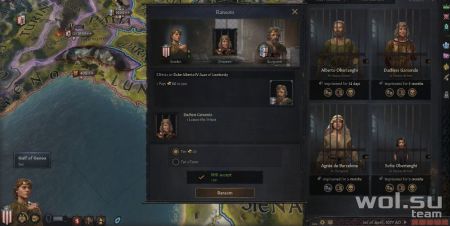 If you urgently need additional coins, check if there is a person in your kingdom who can rightfully be imprisoned. Traitors, assassins, and malcontents can be arrested using the Imprison interaction and then ransomed to their respective lieges.

When using this tactic, it is important that the offender is important enough that the vassal is willing to pay a ransom for him. Family members, advisors, and the vassal himself are the best targets. If you’re targeting a vassal, look for someone with a high rank but a weak position; characters of ducal rank with few holdings are best suited, since the ransom amount is determined by the rank of the prisoner. A weak duke is easily subdued and will pay the most to get out of prison.

Warning: Even if you have reason to arrest and imprison a vassal, this will greatly upset him and his relatives. Don’t try this against someone you need support, such as one of your advisors.

If you don’t have a good reason for imprisoning a character, you have two options. You can just imprison him if you can afford the Tyranny penalty at the expense of your other vassals, or if your Terror is high enough that it doesn’t matter. Alternatively, you can send your Spy to dig up dirt on them. It will take longer, but in Crusader Kings III, everyone is to blame. All you have to do is find your target’s dirty secrets, then expose and arrest them. 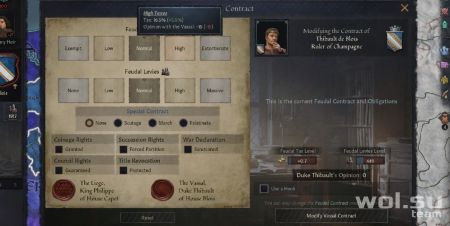 If your vassals like you, or if you have a hook on them, you can change their feudal contract and demand more tax money from them. This must be done on a per vassal basis, so you can’t just issue a general decree to raise taxes.

Vassals must agree to changes to their contracts, so if you don’t have a hook, you may have to give them something in exchange for a larger share of their money. Guaranteeing them a seat on the Council is usually tempting enough, but you can also use the Seesaw Scheme or arrange an advantageous marriage for them to boost their opinion before contract negotiations.

Ask the Religious Leader for Gold 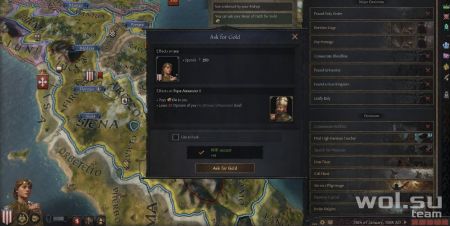 If your religion has a spiritual head of faith (this can be checked on the “Religion” tab), you can apply to him for money. For Catholic rulers, this is easiest to do, since the Pope is usually loaded. Right-click on the portrait of the head of your faith and select the “Ask for Money” interaction.

The Head of Faith will only agree if he likes you, and the amount you receive will range from 100 to 750 gold, again depending on how much he likes you. Whether they agree or not, asking for money costs 250 piety and incurs a minor opinion penalty with the Head of Faith for several years.

You cannot ask for money if you are currently at war with the Head of the Faith or have been excommunicated for obvious reasons. 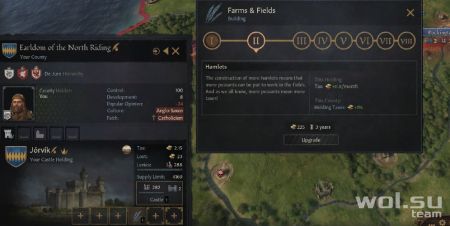 When you have cash, one of the best things you can do with it is to increase your overall income by investing in your holdings. Each holding has several buildings that can be built and upgraded depending on the technology level of your culture and the type of terrain in that holding. In most cases, the best choice is the Farms and Fields chain of buildings, which provide the most income.

The additional income from buildings is designed to grow slowly and slowly, so you’ll want to build and upgrade them whenever possible to maximize the amount of money you can earn over the course of the game. A single farm can take decades to recoup the investment before it becomes profitable, but upgrading your holdings is essential to keep up with the competition.

Appoint your own tax collector 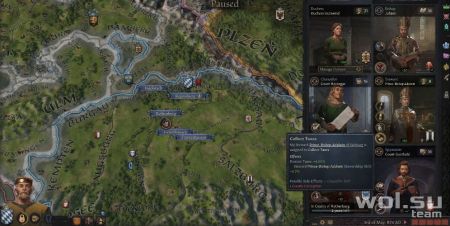 By default, your steward will travel around your kingdom making sure that all necessary taxes are paid to you. In most cases, it’s best to leave them in that role and let them do their job. The Steward will not only increase your total tax income by half a percent for each Steward skill point, but will also collect additional taxes from time to time, giving you a lump sum right away.

Increasing the level of development and control in your lands 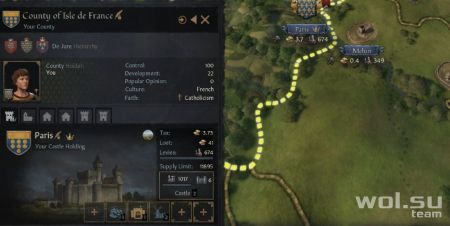 If your income is less than you expect, check to see if any of your holdings would benefit from increased development or control. Development grows slowly over time, and can be accelerated by appointing your district manager. Each point of development in a county increases its tax income and fees by half a percentage point, making counties with a high level of development especially valuable.

Note: Development only increases the income of feudal and clan governments. Tribal governments do not benefit economically from development, but can almost always participate in raids if they need funds.

Control can fluctuate over the course of the game, but ideally you want it to be at 100 as often as possible. For every control below 100, the county will pay one percent less tax per month. Control tends to be low in newly conquered territories, especially if the population is of a different religion or culture than their new overlord. Failure to defend the county from the besiegers also reduces Control.

If you need to quickly increase Control in a county, send your marshal to clean up the mess. The “Increase Control” quest does what it says on the tin, and may also remove the Corruption effect (if any)!