Because Horizon: Forbidden West is such a massive game with tons of missions to complete, you need to find a way to make movement smoother, and that’s where the new shield-wing glider comes into play. The glider will help Aloy glide across a large area and easily descend from high points.

In this guide for Horizon: Forbidden West, you will learn how to get a paraglider for Aloy and how to properly use it.

How to get a shield-wing glider 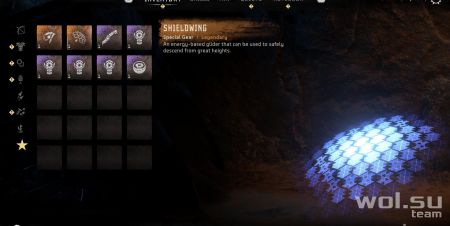 Horizon: Forbidden West players won’t have to dive deep into side quests or secret ruins to unlock the glider. Luckily, this new mount will be available as part of Aloy’s main story missions. The story of the “Forbidden West” unfolds over 17 missions, and the glider can be obtained automatically after the events of mission 4, “The Embassy”. After the scene with Lone, the story mission will end, players will earn experience points and skill points, and will be able to use the glider whenever they want.

How to use the shield-wing glider 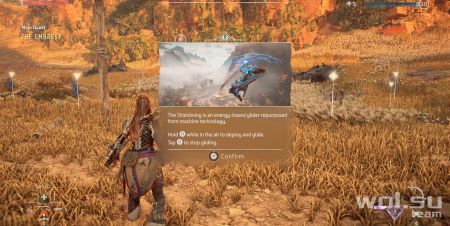 The in-game description for the glider reads: “The Wing Shield is an energy glider based on machine technology.” Now you can jump from a high point (like a mountain) and then hold the button while in the air

to deploy the glider and glide across the sky. This will not only protect players from serious damage when falling from a great height, but will also allow them to cover long distances faster. To stop sliding and fall to the ground, players need to press the button

With a glider in hand, you will proceed to story mission 5 called “Death’s Threshold” with a recommended level of 10. So if players have missed the side content and have not yet reached this level, it is recommended to stretch a little to make sure that the further path will not be too difficult. And grinding in Horizon: Forbidden West isn’t just about fighting cars: by completing tasks across the map, Aloy will gain a lot of experience to quickly level up.