In Stray, after traversing the Zurk-infested rooftops to install a newly repaired transceiver for Momo, players will once again find themselves in the slums. There, they will need to meet Momo at a bar, which will lead to Jacob mentioning that Doc was working on a weapon to fight the Zurks before mysteriously disappearing during the events leading up to Stray.

Although Momo didn’t know about Doc’s weapons, he remembers that his old friend mentioned the secret lab several times and suggests they go to Doc and Seamus to check it out. Players will be able to follow him, though they will have to explore the apartment on their own as Momo is too big to climb through the damaged vent. What follows is the first of two large puzzles in the sixth chapter of Stray.

How to find Doc’s secret lab 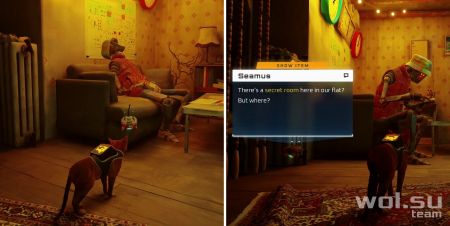 Immediately after entering the apartment, players will find Seamus sleeping on the couch. However, he soon wakes up, at which point the players must show him Doc’s notebook from chapter 4 and ask him about the secret lab. While he seems interested in helping find her, he doesn’t have any useful information, so players should jump onto a table that has photos and certificates hanging above it. 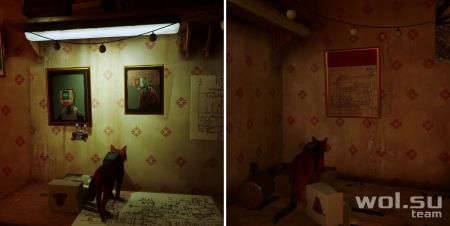 Upon closer inspection, players will notice that they can knock down pictures. Those who have already opened a safe in the slums should be very familiar with this process. For those who haven’t, just press the Triangle button when prompted. While all the paintings here can be knocked off the wall, players only need to worry about two of them. 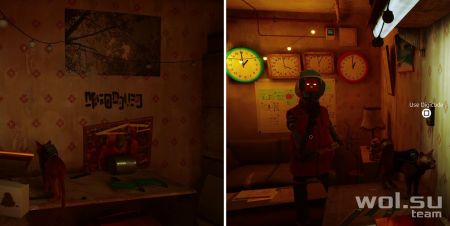 The first is an image of two robots shaking hands, located to the right of the table. If you knock it out, a hidden message will open, which in the B-12 translation will sound like “Time will tell.” The second picture to discard is the picture of the yellow robot on the far left side of the table. Instead of a secret message, he opens a hidden keypad where you need to enter a four-digit code, similar to the one at the end of chapter 3.

How to find the secret code from the lab door 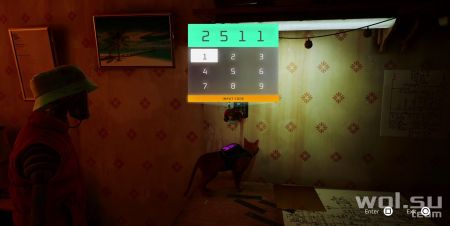 In order to find the code to the secret lab in the intended way, players will have to use the secret message they found a minute or two ago. “Time will tell” is, of course, a reference to the four clocks on the adjacent wall, which, from left to right, are set to two, five, one, and one o’clock respectively. Therefore, players can deduce that the four-digit code that opens the door to Doc’s secret lab is 2511, and if entered on the panel on the wall, a secret entrance will appear. Once inside, players must knock the cardboard box off the shelf to the right of the board and then show the broken beacon to Seamus to advance the story.