Traveling is an activity that will take up a significant amount of time in V Rising, and fast travel is an available mechanic to help speed up this often tedious process. The world offers fast travel in two main ways: Waygates and caves. Gates are a network of portal-like structures that can teleport a vampire from one place to another. The player first needs to find a portal in this open survival world in order to activate it. In other words, it is not possible to fast travel to a gate in an unseen location on the map.

However, a significant disadvantage of using Gates in V Rising is that they do not allow you to take possession of resources or loot. Vampires will have to store their unequipped items in a safe place before fast travelling, or they will have to drop everything they have in order to activate the portal.

Alternatively, adventurers can take advantage of the cave passage system for fast travel and survival in V Rising. The caves function as gates, however their underground tunnels are only one-way. This limitation is due to the fact that the exit from each passage is located on an inaccessible ledge. Once the players descend down, they cannot return to the Cavern Passage unless they make their way all the way back to the original entrance. Moreover, there are significantly fewer caves in V Rising than gates. 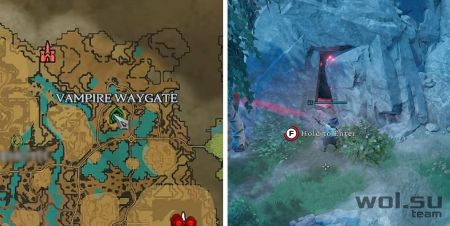 At first glance, Cave Passages may seem like a shabby way to fast travel in V Rising, but it’s far from it. Fast travel through the Caverns allows players to take all their belongings with them from point A to point B. Therefore, Cave Tunnels can be considered an excellent form of teleportation, excluding their one-way nature and lack of accessibility on an indie open-world survival map.

It should be noted that gates can be built from the Build menu in V Rising, giving players the freedom to place a fast travel point wherever they wish. However, this building perk only comes into play later in the game, most notably after defeating Polara Fairywalker in the Glowing Meadows of Farbane Forest. Completing this quest will unlock the Vampire Gate, allowing fans to build it using the following materials: