Tower of Fantasy has a huge open world to explore, but moving from point A to point B multiple times without fast travel can be tedious. Luckily, the player will get the mount fairly early on during their journey, around level 14. However, the mount is more for show and less practical when traversing the large open areas that have already been explored on this Genshin Impact style map.

Therefore, Wanderers need to unlock fast travel in Tower of Fantasy in order to move quickly and complete quests or tasks more efficiently. Walking around the world can be fun and exciting, but because it’s an action MMORPG, the gameplay is heavily focused on combat and less focused on simulating Strand-style walking. Accordingly, players need to know how Tower of Fantasy’s fast travel system works so they can quickly move from fight to fight while wielding the shiny new weapons they’ve pulled out of the gacha.

Fast travel in Tower of Fantasy is done using devices known as “Space Rifts”, which function in a similar way to Waypoints in Genshin Impact. Space Rifts are prominent tall pillar-like structures with a teleportation platform at their base. Initially, these devices are inactive, as evidenced by neon red lights. However, once activated, these glowing wisps will turn green, and the Wanderer can use them as a guide to move quickly in and out of the world. 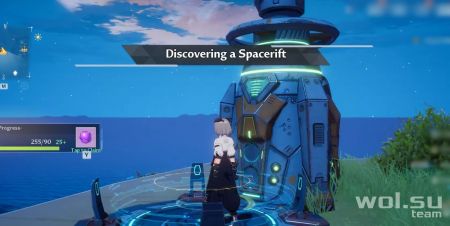 To unlock fast travel in Tower of Fantasy, Wanderers must advance far enough in the main campaign before Shirley introduces the protagonist to Space Rifts. Naturally, she explains that two of them must be activated in order to teleport. Thus, as soon as the player activates another Space Rift, he will be able to quickly travel to the Tower of Fantasy.

There are a total of six Space Rifts in the Astra starting region that Wanderers can discover and use to quickly travel through the area. Keep in mind that Genshin Impact fans must physically activate each teleporter for Space Rifts to work. In other words, it is not possible to fast travel to a Space Rift that has not been repaired. To see Space Rifts on the in-game map, press M and look for yellow icons that look like teleportation platforms. Click or tap on one of them next to the location you want and select Transfer. In a few moments, the player will be in a new location in the Tower of Fantasy.