In MADiSON, players will face the horrors of an alternate version of their grandfather Luca’s house, as well as a terrifying creature, Blue Nees. This is a tall, thin, otherworldly creature with sharp teeth and no eyes. Throughout the game, the Blue Nees relentlessly harass players, appearing and disappearing. If players fall into the hands of Blue Nees, they will pass out and wake up in a safe room. However, in order to progress through the story, players will have to find a way to escape.

There are several repetitive elements in the game that are crucial in order to learn more about the story, progress through the story, and find a way to escape Blue Nees. One of them is a camera that the main character Luka receives at the beginning of the game. With the instant camera, you can take pictures of items throughout the house, but in certain places, the picture will cause a change or reveal a tooltip. The gramophones that appear throughout the house are another recurring element that is crucial to Blue Nees’ plot.

To escape Blue Nees, players need to find and launch the gramophones. Of the six gramophones available, two of them will randomly give players one of Blue Nees’ eyeballs. These are the essential items needed to stop Blue Nees from chasing the player and escaping them once and for all. 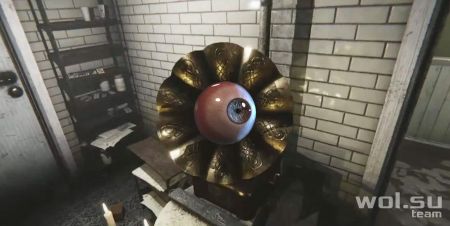 When players interact with the gramophones in Grandpa’s house in MADiSON, Blue Knee appears. The gramophones must be manually wound to play the song, and to see if Blue Nees’ eyeball appears, players need to play the entire song. Even though the mechanics are quite simple, once the song is played, Blue Nees will appear and start chasing the player. The secret to stopping Blue Nees is to collect his missing eyeballs and return them to the hole in the floor in the safe room; if players take a picture of the hole with their camera, they will see a bunch of eyeballs under the floorboard, hinting at what needs to be done.

Players will recognize the arrival of Blue Nees in MADiSON by an eerie, echoing sound that is accompanied by screen shake. When players first learn about Blue Nees by reading a creepy children’s book, they’ll be told that he’s afraid of the light and needs to use something bright to protect himself. The only bright object that the players have is the camera flash, so when Blue Nees appears, take a picture of him. Blue Nees will appear and disappear, but the flash of the camera should make him disappear for a while. Keep winding the gramophone crank and play the song to the end, then check to see if an eyeball appears in the hole in the gramophone horn.

Once the players have found both eyeballs, return to the safe room where there are candles and wooden blocks in a circle on the floor. Place both eyeballs in the hole in the floor and Luka will confirm that his grandmother was not sick, that she did not commit any murders, and that Blue Nees is to blame. The room will darken, and when the players take a few shots to see what’s going on, the Blue Nees will grab Luca. This time, Luka wakes up in another room, but he manages to escape Blue Nees. Follow Madison’s ghost down the hallway and complete the story.