The boss of the “Heisenberg Factory” in Resident Evil: Village is not Heisenberg himself, but the failed experiment Sturm. Storm is one of Heisenberg’s biomechanical creations, which he sent to Ethan to be torn to pieces. As with other creations Ethan has encountered, he will have to use Sturm’s red energy core to defeat him.

Throughout the factory, Ethan runs into Sturm several times before the actual fight. Storm chases Ethan twice down the hallway, attempting to slash him with his propeller face, a design that is controversial for allegedly being stolen. Ethan can also find a note about Sturm written by Heisenberg, who came to the conclusion that his creation was a total failure. Heisenberg creates all these biomechanical soldiers as bioweapons for the army that is supposed to destroy Mother Miranda.

Sturm’s propellers, frontal invulnerability, and ability to break through walls can make him an intimidating boss. In addition, it ignites over time and can shoot fire. However, with the right weapons and strategies, Sturm can be easily defeated. 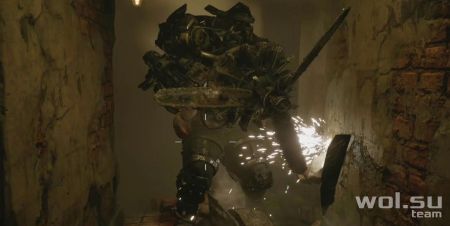 The first thing a player notices in the Sturm boss fight is how small the arena is. The boss area is a series of brick walls, making the space very claustrophobic. Even worse, Sturm’s main attack is to run at Ethan, trying to cut him with his propeller – another brutal trauma to endure in Resident Evil: Village. Therefore, the first thing the player wants to do is use Sturm to destroy the walls. As shown in the introductory video of Sturm, he can destroy the brick walls around the arena. Sturm’s running attack is also very predictable, as he doesn’t deviate from his trajectory once he starts running. With this in mind, the player can position themselves against the walls they want to destroy, wait for Sturm to start running, and then dodge out of the way. This will open up the arena and allow the player to dodge more easily. The player should pay attention to the fact that Assault cannot break all walls. In any structure that has pipes or looks more metallic, Sturm will run into a wall and get stuck for a moment. This is important for reaching Sturm’s weak point.

Throughout the lengthy “Heisenberg Factory” level in Resident Evil: Village, Ethan has to deal with Heisenberg’s soldiers. These enemies are distinguished by the fact that they can only be harmed by shooting through their core. Like these enemies, Ethan can only damage Sturm by attacking its core. The difficulty with Sturm’s core is that it is located on his back, and Sturm constantly tries to turn to face Ethan. The player can use the same strategy as before to counter this in order to get behind Sturm. If the player causes Sturm to run into an impenetrable wall, he can climb behind it and shoot at the weak point of the red energy core and deal damage. Any weapon can be used for combat, but shotguns, rifles, and magnums are the best options for the player. If the player decides to use the shotgun, it will be most effective to get close to the Sturm. This ensures that every bullet hits the energy core.

When enough damage has been dealt, Sturm will enter a second phase in which Sturm will burst into flames and become more aggressive. When the Sturm is ignited, it will run at Ethan three times, one after the other. When on fire, the Sturm is much more elusive and it can be difficult for the player to find a good opening. However, if the player leads Sturm the right way, they can make this Resident Evil: Village boss run past, and then the player can turn around and shoot the cannonball while Sturm is running. Eventually, Sturm will cool down and lose fire. This will cause him to revert to his first phase behavior before he flares up again. The player should try to deal as much damage as possible while Sturm is in this less aggressive state.

When Sturm is on fire, he can also shoot fire. The Assault will beep (RPM sound) when it fires. The player should focus on avoiding the fire by simply running away, although the safer option is to hide behind a wall. If the player manages to get close to the Sturm, it can be used, dealing fire damage. While dealing fire damage, Sturm cannot change direction. This means that the player can use this time to fire some shotgun or magnum bullets into his core.

Other strategies the player can use are the use of explosives, especially mines. If Sturm is standing with his back against a wall or the player has difficulty getting to him from behind, the player can throw a pipe bomb so that it falls next to Sturm’s feet, preferably behind him. If done right, the explosion will hit its core. The player can also use the environment to direct Sturm towards the mine. If the entire room has been cleared of brick walls, there will still be a few indestructible pillars near the walls. The player can use them as corners to hide from Sturm, and as a funnel for Sturm’s movement. They can turn these corners and plant a mine when the Storm is chasing the player. As a result, Sturm will step on a mine, causing even more damage to it. If the player manages to avoid the Onslaught and keep dealing damage, they will survive the boss fight and be able to move on to face Heisenberg in Resident Evil: Village.