In Dune: Spice Wars, but players can make pacts with other factions. One of the main advantages of the game is that there are other ways to win besides dominating different factions. Players can also win by political means or by hegemony.

Making a deal is not always the wisest thing to do. There can be tension between the factions in Dune: Spice Wars, and there is a strategy to understand who is the best to form an alliance with. It depends not only on which faction the players choose, but also on the position on the map. Because the maps are procedurally generated, each game offers different challenges and no two games are the same.

In general, it is important for players to know what they hope to achieve and to make agreements with other players that will help them achieve this goal. This applies more to experienced players, so beginners shouldn’t worry too much about entering into contracts that are most appropriate for a particular situation. One of the great things about Dune: Spice Wars and other 4x games is the staggering amount of options, and it can be fun for players to experiment and find what works best for their play style.

How to start a contract in Dune: Spice Wars 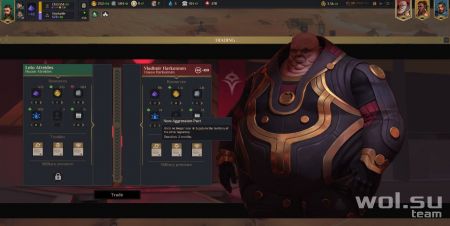 Treaties in Dune: Treaties in Spice Wars are accessed through the trade screen for the opposing faction. Players access this screen by clicking on the faction leader portraits in the upper right corner of the screen during gameplay. There are three different pacts that players can make with other factions. First, players can enter into a research agreement with another faction, which gives them a bonus to knowledge. They can also enter into a trade agreement that increases Solari production.

The last type of pact that players can make in Dune: Spice Wars is the non-aggression pact. In this case, units no longer lose supply while in the territory of the other side. A good thing considering the harsh desert. This treaty requires players to unlock the Diplomatic Maneuvers development. It’s right under the intelligence network development, so at least it won’t take long to unlock it. Alternatively, if players choose House Atreides as their faction, they can choose Lady Jessica as one of their advisors. One of her abilities is that players start the game with the non-aggression pact unlocked. This is a great option for those who want to avoid conflict as much as possible, but it’s a difficult way to play through the game.

All contracts are accompanied by a small penalty to Power production. However, it is only -1, so it’s not a very big hit. For those playing as House Atreides in Dune: Spice Wars, other factions do not lose Power from treaties. This means that they benefit more from making treaties than militaristic factions such as House Harkonnen. It’s important to note that all factions in Dune: Spice Wars can use treaties to their advantage.