inFamous: Second Son takes the series from the fictional locations of Empire City and New Mare to the real Seattle home of the developers of Sucker Punch. With such an expressive city to capture in game, Sucker Punch did an excellent job of recreating a memorable skyline. Of course, any attempt to recreate Seattle in inFamous: Second Son would be futile without the inclusion of the game’s most iconic landmark. However, the game doesn’t just show the Space Needle – it incorporates it into the gameplay and story.

In Mission 7: The Glove, players are tasked with dismantling the Department of Unified Defense’s control equipment atop the Space Needle in Seattle. To do this, players must first climb the spire to the very top and begin fighting waves of DUP agents before they can raise the anarchy flag and take on Brooke Augustine’s thugs. It is worth noting that the Space Needle can only be climbed during this mission, the rest of the time it will be blocked.

How to climb the Space Needle

This mission will begin when Reggie calls about the central antenna that DUP installed on the awesome Space Needle from Second Son. The player will receive an icon on the map indicating the location of the start of the mission – at the base of the building. Head there and press the up arrow on the D-Pad to start the quest.

Use the yellow stairs on either side of the main entrance to go up to the base. At the top, there will be roof vents that players can fly Smoke Dash through using Delsin’s abilities. Once airborne, look up at the center pillar to see a grey/yellow DUP sign that you can climb up.

After reaching another platform, go through the roof vent again to reach the yellow ladder on the scaffolding on the right. Walk through these scaffolding to the back and climb up the white boards to another platform. To the right is another yellow ladder that the player can climb up and jump down to reach the yellow cables leading up. Part of the path along these cables passes through an elevator that will go down to Delsin. 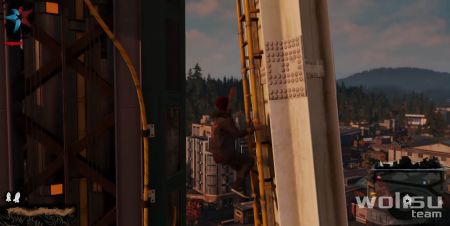 Using Delsin’s power like Spider-Man, continue along the cable to a pole that Delsin can jump over to the other outdoor scaffolding. From here, climb a few more white planks until Delsin reaches one of the makeshift antennas. Looking towards the Space Needle, there will be another yellow staircase on the right, which Delsin will have to jump into the air to reach. 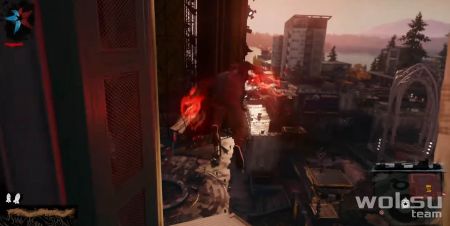 It leads to another antenna decorated with yellow cables that Delsin can hang from. Moving along these cables, Delsin will circle around the antenna and get to a small platform with another vent on the roof. Pass through it to get to the roof of the Cosmic Needle and start destroying the DUP facility and causing inFamous karmic havoc.