In Tower of Fantasy, servers are a somewhat limited and obsolete feature in modern MMOs, they are the main element and determine many of the characteristics of the user experience. For example, being on a certain server affects player latency and who they meet and interact with.

However, there may be a situation where a player and his friend randomly select different servers, but want to play each other after a few hours of play. Likewise, someone could join “Sushi” because they liked the name of the server. However, later they may realize that they are not in the region where the server is located, which will negatively affect their gaming performance. Examples like this are good reasons why Tower of Fantasy fans might want to switch servers.

Changing servers in Tower of Fantasy is a relatively simple process. After logging in and launching the game, players will be presented with a title screen with Nemesis looking up at the sky. From here, select the server name above the “Press anywhere to enter the game” text. A window will appear with a list of regional servers in Tower of Fantasy, and players can choose the one they like best. 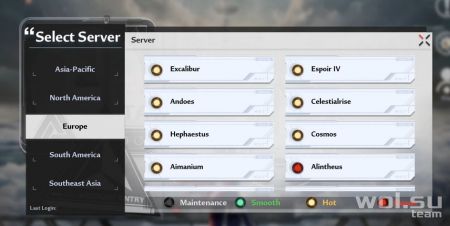 Upon joining a new server, the opening scene will be shown and the player will need to create a new Wanderer avatar for that specific server. Unfortunately, there is no way to transfer characters or related purchases from your account to another server. According to GameSkinny, this dilemma, oddly enough, does not apply to servers in mainland China. However, the global release didn’t get that option, leaving fans with no other options but to create an entirely new character for every new server they change.

Of course, those who haven’t gotten too deep into the main storyline and haven’t yet left the first Astra Island should experience some minor inconvenience when changing servers in Tower of Fantasy. On the other hand, players who have reached the Navia region or spent a significant amount of real money in the game are not so easy to leave everything they have done. Fortunately, their progress will be saved on the previous server, but it’s obviously not a good idea to give up your progress when moving to another server, especially within the same region. We hope that in the future, the global release of Tower of Fantasy will have more flexible server options.