In Stellaris, the Nemesis expansion introduces a new diplomatic feature. Empires with sufficient influence in the Galactic Community can secure favorable laws to strengthen themselves and weaken their enemies. In times of crisis, a mighty empire may even be appointed as a Galactic Guardian with broad powers to deal with anything that threatens the inhabitants of the galaxy.

Of course, having received such power, it may seem that it is difficult to give it up. With this guide, you will be able to become a Guardian and use your influence to proclaim yourself Emperor of the Galaxy!

How does the Galactic Community work? 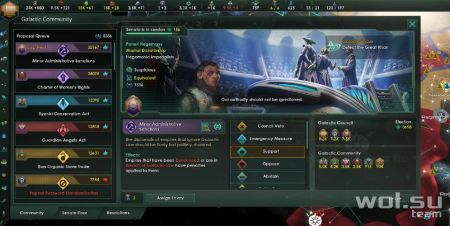 Members of the Galactic Community can propose up to one resolution at a time, voting for or against all resolutions using a metric called Diplomatic Weight. Diplomatic weight is determined by the empire’s economy, population, military, and technology, and can fluctuate greatly over the course of a campaign.

Most resolutions in the Galactic Community result in these four factors contributing more or less Diplomatic Weight. By passing laws that favor your largest contributors, you can increase your voting power in future Resolutions.

The Senate debates only one resolution at a time, usually for four years, before holding a final vote. When the timer expires, the party with the most diplomatic weight – for or against the resolution – wins the vote, and the resolution is passed or not passed accordingly. Empires may change their position on the resolution at any time up to this point, and may also abstain. An empire that has changed its vote must wait at least four months before being able to change it again.

If you have another empire’s Favor, acquired through trade deals or earned by envoys sent to improve relations, you can spend that Favor during a Senate session to force that empire to vote in your favor. Part of the diplomatic weight of the empire will be given to the empire that provided the favors, just for this resolution. Calling for more favorites means transferring more votes.

Note: Since the diplomatic weight from the call of Favor is transferred to another empire, they save those votes in the Resolution. The empire that provided the votes cannot change their mind and take them back.

If a resolution has been proposed but is not currently before the Senate, it is queued for a future session. Empires can declare their intention to support, oppose, or abstain from a queued resolution, and when the resolution is up for consideration, it will start from that position. Resolutions are queued in order of general support or opposition; in other words, a resolution favored or opposed by a large amount of diplomatic weight will be considered faster than one on which the galaxy is divided.

How to become Guardian of the Galaxy 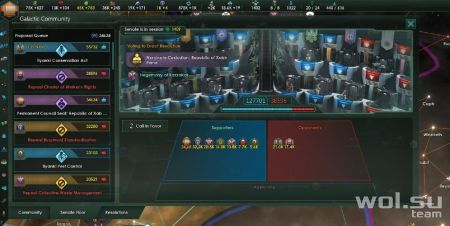 Your first step towards becoming the undisputed ruler of the galaxy is to earn a seat on the Galactic Council. The Galactic Council may be formed by resolution twenty or more years after the founding of the Galactic Community. The Council consists of the three members with the highest diplomatic weight, and each member of the Council has additional powers in the Senate.

A Council member can spend Influence to declare a pending resolution an Emergency Measure, moving it to the front of the queue and adjourning the Senate to begin discussion immediately. It is also possible to pass a resolution giving the Council a veto, allowing any Council member to remove the resolution entirely from the queue.

A member of the Galactic Council can be appointed by resolution to the position of Galactic Guardian, which makes him responsible for the security of the galaxy from major threats, and also gives him wide powers in the Senate. You can nominate yourself, or if you are powerful and respected enough, you can be nominated by another empire. Unless a Crisis is imminent or ongoing, it may take some fighting and a lot of Favor to get the vote through.

The Galactic Guardian has a permanent seat on the Council and can spend 190 Influence to stop debate in the Senate. This can be done if the current debate is half way through and immediately call a vote. This allows the Guardian to ensure that resolutions pass or fail at their discretion, ending debate when the votes are where they want them to be.

The Guardian can also offer special resolutions that provide a powerful effect for the entire galaxy… and especially for the Guardian himself. These may include the creation of the Galactic Defense Force, a Federation-like fleet that patrols the entire galaxy and increases the damage dealt by its members to Crisis ships.

How to become a Galactic Emperor 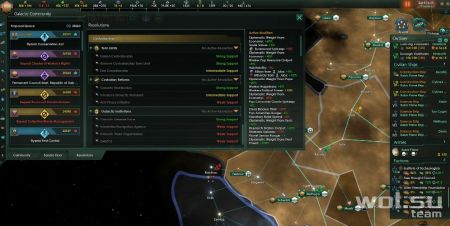 The default term of a Guardian is thirty years. A resolution could be proposed to extend the term for another thirty years, and another resolution to terminate the guardianship early. However, in order to become Emperor, you need to pass a resolution to remove the Guardian’s term limit. This is one of the first Guardian resolutions that becomes available after you are elected to this position.

Once the time limit is lifted, a Guardian reform resolution will become available to proclaim the Galactic Imperium. You can expect a lot of resistance in the Senate, so build up your diplomatic weight during this time, using your power to push through resolutions that benefit you. This is also a great time to accumulate Favor.

Tip: The Imperium cannot be proclaimed if there is a war going on in heaven between two Awakened Empires. However, defeating these powerful enemies is a great way to gain support in the struggle for power!

Successfully forming the Imperium earns the Thunderous Applause achievement/trophy. Alternatively, if you are a Guardian and decide to end the guardianship after defeating Endgame Crisis, your favor will unlock Modern Cincinnatus instead.

How to overthrow the Galactic Emperor 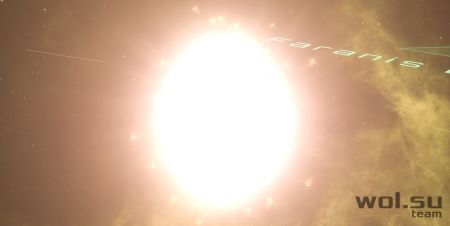 If one of your rivals manages to establish himself in the posh Imperial Palace, the natural solution is to overthrow him for the good of the galaxy. You can send envoys to the Imperial Senate to undermine the Emperor’s power, as well as carry out spy missions against the Emperor for the same purpose.

The goal is to reduce the level of imperial power below fifty. Once the Imperium falls below this threshold, a spy mission will become available to instigate an uprising. This requires a serious level of infiltration into the Emperor’s government, so it could take years or decades to prepare. The rebellion starts a war against the Emperor with you as the military leader. Every member of the Imperium must choose a side – we hope your comrades are as unhappy as you are.

Defeating the Emperor and completing the “Restore the Galactic Community” military objective destroys the Imperium. If you were the leader of a successful rebellion, you will earn the Sic Semper Tyrannis achievement.