Class Tip Child of the Grave

When it comes to the early game of Tiny Tina’s Wonderlands, the game sticks to its role-playing roots in terms of demands for the best gear. Unfortunately for players, the downsides of Tiny Tina’s Wonderlands “farm and shoot” gameplay show up in the player’s gear. Players will quickly level up all of their starting equipment at the very beginning of their adventure. On the other hand, class active skills are a constant source of consistent gameplay and damage throughout the player’s journey to level 40. Graveborn have their starting Active Skill Dire Sacrifice horribly overwhelmed in the first half of the game. He can single-handedly take the player through the entire first half of the game on Intense difficulty. While Bone Reaper has some useful survivability mods, it’s completely unnecessary for low-level Gravechild characters when Dread Sacrifice can take down hordes of skeletons with the push of a button.

What makes it even easier for the player to level up the Child of the Grave is the math behind the hero stats in the early game of Tiny Tina’s Wonderlands. While incredibly important in the late game, the crit chance provided by agility is trivial due to the multiplicative nature of this stat. In fact, almost every hero stat is mathematically insignificant to the player’s performance in the chaotic and unplanned early game. These stats can greatly enhance push builds in Tiny Tina’s Wonderlands end game. However, the only hero stat that gives a noticeable boost in the early game is Constitution. For Gravechild players, this is a huge benefit, as Grievous Sacrifice directly converts increased survivability into more AoE damage.

Best level upgrades for Child of the Grave 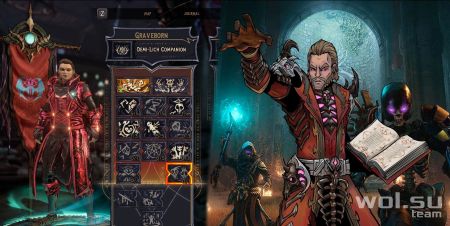 Compared to all other classes in Tiny Tina’s Wonderlands, Gravechild has the least gear-dependent early game. Until level 20, players will be able to rely almost entirely on Dire Sacrifice as their primary source of damage. Around this middle level, players will get more powerful gear and unlock the ability to multiclass. Depending on the nature of the gear, players will need to select the appropriate secondary class in order to use it to their advantage. Players who do not have powerful gear at the time of multiclassing will be able to select Spore Warden to focus more on Dire Sacrifice, as well as gain access to companions. Players with powerful weapons that deal more damage than the Devil’s Sacrifice can choose the Knifemancer to use the status side of both classes. But the most powerful form of Gravechild is its pairing with Spellgun, which players should pick up if they find a powerful, flammable AoE spell. By purchasing this multi-class, players must change their stats and hero skills to move from a low-level build to a build that will allow them to survive until the end of the story.

Prior to the advent of multiclassing, players had a direct path that they could follow. Regardless of which character background the player chooses, the first 20 hero points should be spent on Constitution. Each point of Constitution increases the Division’s maximum and Maximum Health, which also results in an increase in self-healing and damage dealt for the Child of the Grave. Although Gravechild gradually evolves into a spellcaster after unlocking its class trait in Tiny Tina’s Wonderlands, its entire personality in the early game is Dire Sacrifice. The first five skill points should go to the Mortal Vessel, and then immediately five points to the Dark Pact. Players are then free to choose any skill as they progress towards the middle game. Players should avoid using Loyal Sorcerers and Harvest until they start investing in Dark Hydra.

This build is powerful and adaptable, which is very important for the early game of Tiny Tina’s Wonderlands. In the end game, players have control over the equipment they have, but this does not apply to the leveling process. Instead, players will have to survive with what they have. The Child of the Grave thrives in a resource-poor environment, giving players an immersive level-up experience through Tiny Tina’s Wonderlands epic D&D-inspired story.